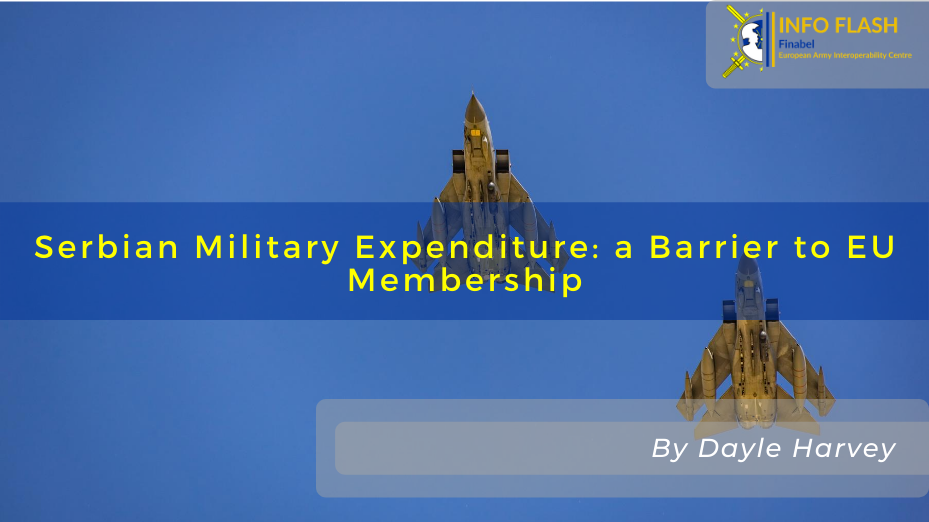 As stability in the Western Balkans is a priority for EU policymakers, it is necessary to examine the causes of military expansion in the region, and the effects of the phenomenon for the EU accession process. In the case of Serbia, the country’s growing military power and dependence on foreign governments such as Russia and China raise questions regarding the prospects of EU accession.

The European Commission continues to view EU enlargement in the Western Balkans as a “geostrategic investment” and a “key political project” (Várhelyi, 2020). In February, the Commissioner for Neighbourhood and Enlargement, Olivér Várhelyi, introduced a ‘new methodology’ for enlargement, based on the pillars of ‘credibility’, ‘predictability’, ‘dynamism’, and ‘political steer’, involving more predictability on what the EU will give in return to candidate countries that deliver on their requests (Várhelyi, 2020). Regarding the EU’s security-related priorities in the region, the 2018 enlargement strategy pointed to a need for partnerships and strong cooperation on common threats such as terrorism, crime and arms trafficking (European Commission, 2018). The accession countries’ relations with Russia and China can be viewed as another geopolitical issue with the potential to affect the enlargement process.

EU enlargement strategy: The intersection between the rule of law and security

Strengthening the rule of law in the candidate countries is fundamental to the EU’s enlargement strategy. Within the Western Balkans, the commitment has translated to priorities such as the development of judicial systems, reduction of corruption, public administration reform, and strengthening democratic institutions (see Zöpel, 2020). Meeting the EU’s requirements for membership has been an arduous process for countries in the Western Balkans, and rule of law is among the fields where some candidate countries continue to fall short of standards.

The intersection between enlargement and resilience building is complex. In general terms, strong institutions contribute to prosperity, which can indirectly foster social stability. More specifically, well-functioning civilian institutions such as law enforcement and the justice system are essential for addressing crime and other security threats that the EU has identified in the region (see United Nations, n.d.).

Military investment in Serbia and beyond

Beyond this, the question of EU enlargement in the case of Serbia is bound to various military-specific considerations. Especially in recent years, there have been increases in military capabilities throughout the region. The average increase of defence expenditure in the so-called “Western Balkan 6”, measured in absolute dollar figures, was 30% over the two years between 2016 and 2018, with Serbia falling just under average at 27% (World Bank, 2020). That said, some of these countries are a part of NATO and therefore are looking to expand their defence spending to meet the 2% threshold expected (NATO, 2019). Serbia may be choosing to expand at what is approximately the average to compete and remain defended in a conflict.

This concept of an arms race is not only perpetrated through the media, but Serbian policymakers have made clear their intentions for military modernization (Ejdus, 2020). As Balkan countries around Serbia increase their defence spending to reach for the target, Serbian policymakers may look to increase defence spending in retaliation. This is both to arm itself in a defensive manner and to potentially use the buildup as a bargaining chip in future negotiations. Another potential reasoning may be internal security matters. Serbia may see the need to discourage secessionist governments and uprisings from ethnic minorities and politically oppressed groups. This could mean maintaining state interests within borders or intervening in neighbouring states where a favoured ethnic group is under attack (Kulenovic, 2019).

The question of military spending is connected to that of weapons imports. We may see interest in the increase of 364% by Serbia between the years 2016-2017 (World Bank, 2020). This can be explained by the 65-million dollar deal between Serbia and Russia in 2017 for the purchase of Air Force equipment (SIPRI, 2020). Additionally, Serbia has purchased facial recognition programs and the Chengdu Pterodactyl drone from China in the same time frame (Kulenovic 2019). Later, 2019 saw a significant increase where spending rose 43%. According to a SIPRI report, general increases in military spending were a trend across the Western Balkans (RFE & SIPRI, 2020).

All in all, despite its bid to join the EU, Serbia has primarily relied on Russia and China for the acquisition of weapons, rather than competing European suppliers. Among other voices, Damon Wilson of the Atlantic Council think tank has questioned whether the reliance on Russian weapons imports is compatible with the path to join the EU, especially in a context where normalising relations with Kosovo is a precondition for membership (Tirana Times, 2018).

With NATO enlargement in the Western Balkans in recent years, Serbia (together with Bosnia and Herzegovina, which is an aspiring member) has found itself as the only non-NATO country in the region. The increases in militarisation in the broader European environment may have an impact on the trust quota required for EU enlargement. Given the imperative for EU members to align their foreign policies, tensions have been observed between Serbia’s goal of joining the EU, and its 2019 signing of a trade deal with the Russian-led Eurasian Union, especially at a time when the EU is employing sanctions on Russia due to the conflict in Ukraine (Euronews, 2019; Stojanovic, 2019).

As the example illustrates, despite its aspiration to join the EU, Serbia is geopolitically walking a fine line between Russia and the West. Russia, who traditionally has friendly relations with Serbia, strongly opposes both Serbian NATO and EU membership (Samorukov, 2019), and weapons exports from Russia to Serbia serve as an indication of Russian political and security interests in the country. Russian influence and interest in maintaining its strong relationship with Serbia also manifest in political relations, trade and propaganda (Russell, 2017). While the EU’s strategic goal in the Western Balkans is regional stability, further militarisation, distrust and corruption among states within the region would increase dependence on Russia.

What is clear is that the states in the Balkans, including Serbia, have a series of obstacles to overcome before EU membership can be obtained. Balkan states commit the EU to follow procedures and plans for their membership journeys, but there are competing world powers who are opposed to these goals. As a result, states may follow Serbia in the purchase of military equipment from outside Europe to meet the demands of the region’s political and economic trends.

As states surrounding Serbia build their militaries to meet the requirements for NATO, though unintentional, they are subsequently decreasing regional stability, which may result in EU accessions being delayed.

If this continues, it could be an emerging security challenge for the EU. Not only could it impact Western Balkan states as members, but the conflict may also strengthen Chinese and Russian influence in Europe. The combination of military instability and diplomatic tensions makes for higher security risks for the EU when considering enlargement to Serbia; therefore, it is unlikely that Serbia will be able to maintain a relationship with Russia and China and commit to an EU accession plan.

European Commission (2018) Communication From The Commission To The European Parliament, The Council, The European Economic And Social Committee And The Committee Of The Regions Enhancing the accession process – A credible EU perspective for the Western Balkans. Available at https://ec.europa.eu/commission/sites/beta-political/files/communication-credible-enlargement-perspective-western-balkans_en.pdf, accessed 23 July 2020.

Kulenovic, S. (2019) Western Balkans and the Return to Arms: Can the EU stabilize the region? Brussels: Vocal Europe. Available from https://www.vocaleurope.eu/western-balkans-and-the-return-to-arms-can-the-eu-stabilize-the-region/, accessed 23 July 2020.

United Nations  (n.d.) Rule of Law and Peace and Security – United Nations and the Rule of Law. Available at https://www.un.org/ruleoflaw/rule-of-law-and-peace-and-security/, accessed 18 July 2020.