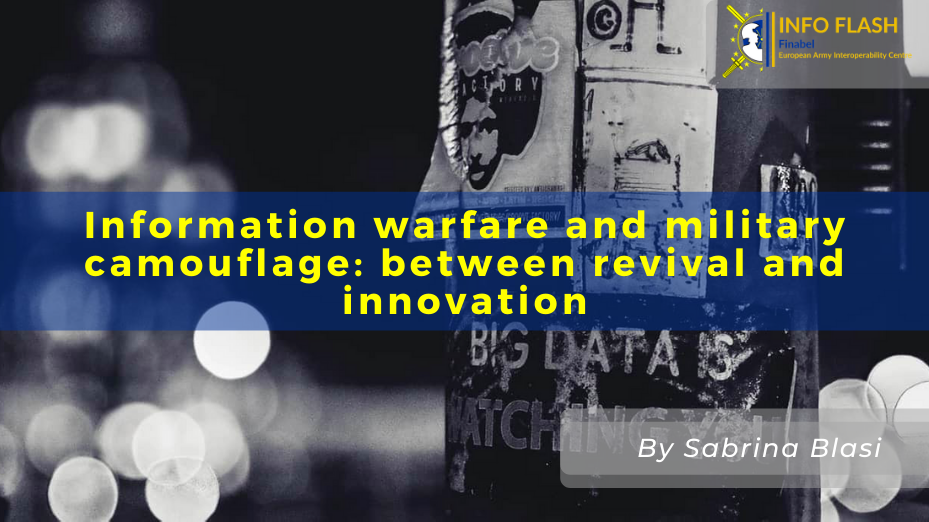 Did you ever think that while using your fitness app during your daily workouts – cycling or running – you could be revealing sensitive information about the location and staffing of military bases and spy outposts of your country?

This is precisely what happened in Syria, where the fitness tracking app Strava gave away crucial information about secret US army bases (BBC, 2018). Military personnel on active service had been publicly sharing their location data and realised that the highlighting of things like regular jogging routes could be dangerous. Although the location of military bases is generally well-known and satellite imagery can show the outline of buildings, the heatmap can reveal which of them are most used, or the routes taken by soldiers.

As information technologies (IT) are rapidly penetrating all spheres of human activity, military affairs are not immune to new concerns either. This article discusses how modern camouflage has kept up with technological advancements and assesses it as a capability that should be adapted and developed according to the ever-expanding information environment. As we will see, today camouflage is no longer solely a means of visually deceiving the enemy, that is to say masking location, identity and movement, painting or screening objects so they fade into their background or creating objects that from a distance have the appearance of fortifications, guns, roads, etc. Instead, it has a broader range of applications in the information environment, and therefore it has to rely on the whole range of information activities.

A brief history of military camouflage

Camouflage has known different approaches during its history, from simply hiding to actively deceiving the enemy. The first significant transformation in modern military history occurred with the advent of modern rifles and the necessity of preventing the enemy from noticing the adversary troops at a distance. This ”first generation camouflage”, which saw its inception in the Boer Wars and was perfected during World War I, was intended to deceive the human eye. To achieve such an objective, means were devised to allow soldiers to blend in with the surrounding environment to reach the enemy lines undetected, or to protect them from enemy snipers (Cole, 2020).

With the technological development brought about by World War II and the Cold War, a new level of camouflage was necessary: it was not just the human eye that had to be deceived, but also radars and search instruments. “Second-generation camouflage” was centred on stealth technology for aircraft and ships, and on jamming systems and encryption tools to hide communications and weapons systems from the enemy. As industrial and technical capabilities evolved, so did camouflage techniques, such as stealth aircraft capable of avoiding detection and infrared ray-absorbent clothing. However, the principle behind this second-generation camouflage remained focused on traditional physical concealment.

The term “Information Warfare” (IW) represents a rapidly evolving and imprecisely defined field (Molander et al., 1996), generally intended as “whatever warfare is becoming in the information-centric 21st century” (Burns, 1999). Today we are living in an increasingly interconnected world, where the information flow crosses countries and affects transversely several areas of our societies such as business, international relations, social cohesion and the military as well. Since communications lean heavily on the internet, or via communications using various parts of the electromagnetic spectrum through terrestrial communications networks or satellite networks in space, an attack against the enemy’s information systems could be very damaging (Stupples, 2015). Therefore, the ever-growing number of Information Technologies (ITs), the use of computers and other electronic equipment to store and send information, raises new questions particularly regarding the preservation and protection of information in the armed forces, as well as regarding solutions to exploit gaps in the adversary’s systems. One way of dealing with these tasks is to specify the place, the role and development priorities of what is known as military deception, camouflage and concealment (Krysanov, 2003). As warfare is changing with developments in IT, it is also necessary to refresh our understanding of these concepts.

We are living in the age of ”third-generation camouflage” (Cole, 2020). Throughout history, wars have been fought in different environments, so patterns and doctrines of camouflage always evolved adapting to them. Due to the ever denser and more entangled networks we operate in and interact with, today the battlefield is just as digital as physical, and camouflage is evolving from a strategy focused on the physical obfuscation of troops, tanks, planes, ships and buildings to means of deception in cyberspace, to hide interferences and exploitations of a State’s information systems.

Stealth, deception and camouflage are still aspects of defensive counterintelligence whose goal is to ensure the security of one’s information, protection of facilities and frustrating adversary intelligence collection. A good illustration of how camouflage operates within the information environment can be found in the context of the 2018 Russian poisoning of former GRU officer Sergei Skripal in Britain.

The very basic assumption of covert action, the “plausible deniability”, involves that a given operation should not reveal the identity of the sponsoring State. (Cheng, 2017). While Russian denials were never particularly plausible, it was the investigative journalism website Bellingcat that revealed the identities of the officers involved in the operation. Because they relied mainly on open source information, it offers an illustrative example of the growing importance of publicly available digital information in intelligence and counterintelligence.

Even though the tools and knowledge are freely accessible, there is a difference between basic and excellent Open Source Intelligence (OSINT), and it lies in the analytical process (Hribar et al., 2014). Open-source data is material that would be of little individual value in isolation but has intelligence value when compiled. For example, a single Twitter post reflecting an individual’s view on ISIS is almost of no intelligence value: however, synthesising all tweets expressing opinions on ISIS from within a given geographic area can be hugely valuable. Similarly, individual protocol (IP) addresses are of no intelligence value, but mapping the world’s 4.3 billion IP addresses provides a global picture of Internet usage (Williams & Blum, 2018). Thus, OSINT has to be reconsidered as a formal tool and means of great analytical support in the work of intelligence services.

In 21st-century warfare, the information environment involves not only states but also citizens and other societal actors as actors present on the virtual battleground. NATO’s 2009 Joint Doctrine for Information Operations (NATO, 2009: 27) mentions three activity areas for information operations. The first is activities that focus on influencing the adversaries’ perceptions and attitudes; the second is information activities that focus on protecting the armed forces’ freedom of manoeuvre; the third is information activities that focus on affecting the data that the adversaries use in their “command and control, intelligence, surveillance and target acquisition, and weapon systems”. Of these, the famous example of Russian information campaigns targeting the American population ahead of the 2016 US presidential election would represent the first area of action. Reliably attributing some aspects of the campaigns to Russian actors has proven challenging, which is another illustration of the importance of concealment and camouflaging in the contemporary information environment.

When considering camouflage, deception or other “unconventional methods”, we should consider them not only in their stricter sense – for instance, camouflage is “clothes worn by soldiers, cam-cream on faces and scrim on helmets” (Cole, 2020) – but in a broader one. Indeed, camouflage now stands in the information environment and as such requires to bring together capabilities, functions and specialist knowledge from across the information activities. They are entangled within a framework of interrelated capabilities, as Psychological Operations (PSyOPS), Presence, Posture and Profile (PPP), Operations Security (OPSeC), Information Security (INFOSEC), Deception, Electronic Warfare (EW), Physical Destruction (PD), Key Leader Engagement (KLE), Computer Network Operations (CNO) and Civil-military Cooperation (CIMIC). These are the most important capabilities according to the Allied Joint Doctrine for Information Operations (Tibor, 2013) and modern camouflage should rely upon an interplay between them. As decision-making processes risk being affected by the accelerating speed and increasing volume of information available, strategic thinking should be particularly alert to the threat of information that has been “misinterpreted, misrepresented, taken out of context and twisted” (ibid.), thus used as weapons to threaten us. Old ways to think about camouflage and non-conventional methods as second-rate capabilities should modify according to the growing importance of the information environment. Nevertheless, different approaches to Information Operations (IO) and old notions of camouflage still exist. These topics continue to generate much debate amongst experts with some of them arguing we could lose the operational edge if we do not adopt new strategic thinking.

Giles K., Beware Russian and Chinese Positioning for After the Pandemic, Chatham House, 2020. Available at https://www.chathamhouse.org/expert/comment/beware-russian-and-chinese-positioning-afterp and emic, accessed 22 June 2020.