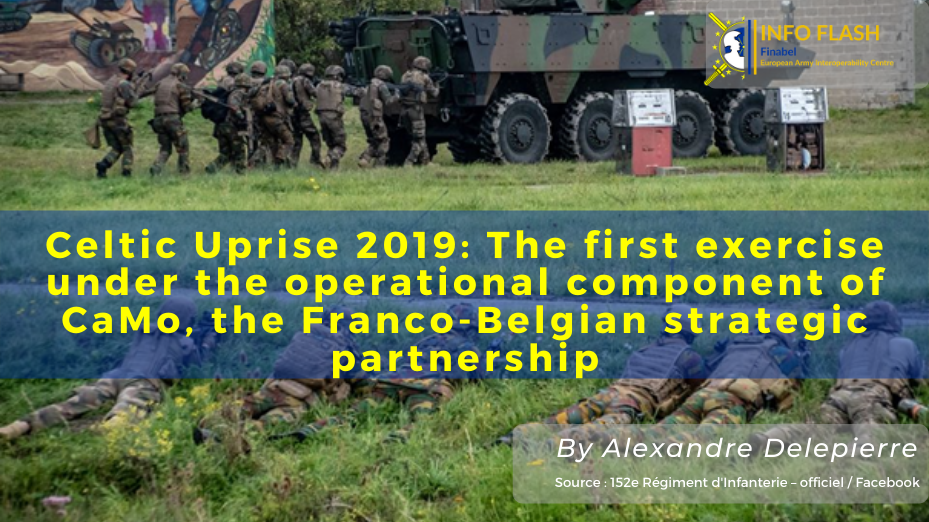 While the establishment of an EU army is not realistic in the short term, some defence and military stakeholders favour defence cooperation initiatives that bring together a limited number of countries to enhance European military cooperation and coordination. A similar proposal was also promoted by Dick Zandee of the Clingendael Institute at Finabel and the Egmont institute’s February 11 seminar on Franco-Belgian defence cooperation, within the framework of CaMo programme.

The deepening Franco-Belgian operational military cooperation demonstrates the far-reaching collaboration between these close allies. The Celtic Uprise exercise on 16–27 September 2019 saw around 900 soldiers from the Belgian Motorized Brigade and the French Land Army train collectively in the Belgian provinces of Luxembourg, Namur and Hainaut (D’haene, 2019). Nearly 250 armoured, reconnaissance and troop, as well as material transport vehicles, were deployed during the exercise (Gillet, 2019). Soldiers practised core tasks they would be likely to face in a combat deployment, such as patrols, securing sensitive points, convoys, anti-terrorist actions and medical evacuations (Belgian Armed Forces, 2019b).

The first exercise of the Franco-Belgian CaMo programme

Celtic Uprise was the first exercise of the operational component of the CaMo (Motorized Capacity) programme. CaMo is a strategic partnership contract of €1.6 billion signed by the Belgian and French governments in November 2018 that came into effect on June 21, 2019. The partnership covers two main aspects. On the one hand, the partnership foresaw the Belgian Land Component purchasing and acquiring new materiel already used by the French Army, such as armoured vehicles. On the other hand, CaMo aims to reinforce the binational operational capacity between the French and Belgian armies. Interoperability is at the core of the programme, which aims to make Belgian and French units interchangeable to conduct joint actions (Belgian Ministry of Defence, 2020).

Importantly, the contract provided for the re-equipment of the  Belgian Army’s manoeuvre units through a purchase of 442 armoured vehicles: 382 Griffon (multi-role armoured vehicles) and 60 Jaguar (armoured reconnaissance and combat vehicles), from Nexter, a French government-owned arms industrial group (Cabirol, 2019). The French Army already uses these modern armoured vehicles in the Scorpion Programme (Challenges, 2019).

However, CaMo is not only a procurement program. According to Belgian General Marc Thys, CaMo will harmonise and standardise “doctrine, organisation, training, materiel, leadership, personnel, facilities” between the two countries (Gain, 2019a). The exhaustiveness of the elements taken into account makes this binational cooperation a unique one. For instance, the CaMo cooperation provides for joint training courses and common training procedures between the Belgian and French armies (Cabirol, 2019).

Human forces at the heart of the initiative

Concretely, Celtic Uprise enabled a Belgian SGTIA (Sous-Groupement Tactique Interarmes; Joint Services Tactical Subgroup) to be integrated into a French GTIA (Groupement Tactique Interarmes; Joint Services Tactical Group). The first objective lay in the use of French doctrine as a reference for both countries (French Army, 2019). According to Major Louis Marie, Operation Officer in the Belgian motorised brigade, Celtic Uprise allowed the brigades to exchange points of view and share best practices, especially regarding communications in the field (Meyer & Quindot, 2019). The French Army also emphasised that Celtic Uprise was designed to improve the interoperability between the two armies in as many areas as possible, including radio communications and the use of weapons (French Army, 2019).

Additionally, all the meetings and exchanges that took place during the exercise were conducted in English. This allowed the participating forces to train language, an element might otherwise have gone neglected in an exercise between two predominantly francophone armies, with a view to future operational military cooperation between more Member States or on an EU-wide scale (Drahi, 2019). A firm grasp of a common command language is necessary if Member State armies are to interoperate effectively.

Celtic Uprise shows in practice that material purchase, despite being an important aspect of CaMo, is not the sole component of cooperation between France and Belgium. Human interoperability is effectively at the core of the programme, as underlined by the joint training. During the exercise, the Belgian Major Louis Marie said that regarding leadership, it was noticed that France and Belgium had two very different, yet extremely complementary approaches. In his view, the exercise should serve as a basis in the coming years to improve the training of the French and Belgian armies’ officers (Meyer & Quindot, 2019).

According to Colonel Manuel Monin, Belgian Officer of the Scorpion-CaMo programme within the general staff of Belgian Land Component, Celtic Uprise is the first step of an overarching project (Drahi, 2019: 40–41). He added that in the next two years, the Belgian Land Component would be devoted to integrating the French Scorpion doctrine, the objective being to review Belgian doctrine to model it on the French one (ibid.). A key characteristic of Scorpion doctrine is the concept of “collaborative combat” which incorporates squads, vehicles, battle groups and brigades into a single unified network which updates in real-time (Defense News, 2016).  If achieved, this integration will allow Belgian land forces to be interoperable with French units from the GTIA level. This objective, therefore, aligns perfectly the intention to enhance European interoperability.

As the two armies are likely to carry out new joint operations in the future, further coordination is required, and therefore more Franco-Belgian exercises are expected (D’haene, 2019). The French Army has already stated that over time, it would like to organise this binational exercise annually (French Army, 2019).

By enhancing Franco-Belgian operational military cooperation, Celtic Uprise prefigures the creation of a Belgian Specialized Training Centre on the theme of “NATO Stability Operations”. The training centre will allow bi-national joint services tactical groups and subgroups to be certified (French Army, 2019). In return, Belgian units will be able to use the French CENZUB and CENTAC training centres (ibid.). This quid pro quo will involve further joint training between the two armies, approaching step by step the final goal of achieving full interoperability. As indicated by Colonel Manuel Monin, in 2025, once the equipment acquisition plan is completed, the Belgian Army will have a real mirror brigade with its French counterparts, allowing the two armies to go into military operations with an identical configuration (Drahi, 2019: 40–41).

These future joint actions and operations demonstrate that Franco-Belgian operational military cooperation is only at its onset. After the Celtic Uprise exercise, the French Major Stéphane Perotin from the 152nd infantry regiment’s instructional operations’ office said that the level of interoperability should ultimately go down to reach “section level”, that is to say, that it should encompass all hierarchical levels (Drahi, 2019: 40–41).

While continuing to accentuate their operational cooperation, the two armies will need to overcome certain challenges. In a long-term perspective, namely when deep cooperation between more European countries takes place, the use of English will be the norm. Nevertheless, as emphasised by Stéphane Perotin, while the use of English is widespread at high hierarchical levels, soldiers in the French military are rather accustomed to interacting in their national language (Gain, 2019b). Consequently, the personnel’s language skills may still be insufficient for day-to-day international cooperation. This is an area for improvement, keeping in mind the ultimate goal of achieving interoperability on an EU-wide scale.

France and Belgium should continue to maintain an equilibrium regarding the operational aspect of their cooperation so that it does not tip the scale in favour of France. This aspect may constitute a challenge when one nation and its Army is bigger and more powerful than the other ones’. However, Dutch-German cooperation should be a role model on this matter. German and Dutch armies have strengthened their cooperation since 2014, including through creating joint units. For example, the 11th Dutch Airmobile Brigade representing 2,000 military personnel became fully integrated with the German Division Schnelle Kräfte in 2014 (Dutch Ministry of Defence, 2014), and the German 414th Tank Battalion, also called Panzerbataillon 414, was attached to the Dutch 43rd Mechanized Brigade in 2016 (Noll, 2018). These examples underline that the Dutch-German cooperation goes both ways.

To conclude, Celtic Uprise is an important first step towards further operational cooperation between the French and Belgian armies. The success of this first exercise is a positive indicator for those who support enhancing European military cooperation, coordination and interoperability through an approach based on cooperation between a limited number of countries. As the first exercise in the Franco-Belgian CaMo partnership, Celtic Uprise represents the idea articulated by the Belgian Armed Forces (2019a) – namely, that “looking for win-win cooperation should become a mindset”.