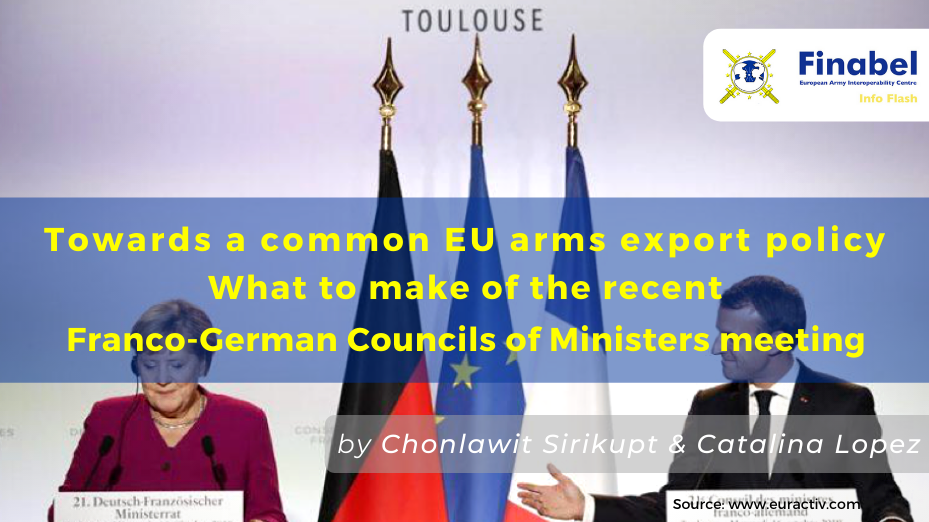 Streamlining the decision-making processes in joint-EU armaments projects has been a critical challenge in the integration of EU defence industrial policy. So far, despite the promulgation of the Common Position on Arms Export in 2008, the EU has not been able to enforce a common arms export policy. As a result, member states have acted divergingly on some issues that affect their security interests, which could set back the EU’s strategic position and its overall defence capabilities. The recent Franco-German Council of Ministers meeting that took place on October 16 in Toulouse, France, visibly reflects continued efforts to develop a common approach to arms export in line with the 2019 Treaty of Aachen. It would support ongoing and future joint defence projects such as the Future Combat Air System and the Main Ground Combat System, which would not only be developed for the German and French armed forces, but also sold to third countries.

At the meeting, Germany and France agreed on a legally binding arms export agreement, “to be implemented as soon as possible.” As it stands, the agreement evokes the 1972 Debré-Schmidt Accord, which stipulated that one partner of a Franco-German defence project cannot veto the export of the equipment by the other. This applies not only for weapons systems but also the supply of components. Nevertheless, both sides managed to compromise on a 20% threshold, meaning that one side could have a say in the partner’s export of joint weapons systems if its contributions exceeded that amount. Specifically, an export consent from the country where the component was manufactured would be required. Excluded from the simplified approval process are small arms such as rifles and pistols that Berlin deemed “particularly sensitive.”

While the specifics of the agreement have not been made public, the compromise has already been met with both criticism and support domestically. On the one hand, there are grave concerns that renewing the spirit of the Debré-Schmidt Accord would allow a partner country to export weapon systems and components to countries that have poor track records of repeatedly committing human rights abuses and violations. On the other, the agreement is seen as beneficial for strengthening EU defence cooperation that could enhance troop interoperability in the future. Rolling back restrictions and harmonising standards and procedures could incentivise member states to invest in joint defence projects that cannot be sustained by national budgets alone. For instance, Poland has expressed interest in contributing to the development of the Main Ground Combat System, a Franco-German Main Battle Tank (MBT) project that was launched in 2012 to replace the Leopard 2 and Leclerc MBTs. However, Warsaw recommended that the project be placed under the Permanent Structured Cooperation framework (PESCO) and supported by EU funding. PESCO projects that are in line with the Capability Development Plan are eligible for funding from the European Defense Fund, which would complement member states’ investment by co-financing the costs for prototype development, as well as costs related to certification and testing requirements.

Notwithstanding the domestic debates on the gains and losses to parties of the agreement, the bilateral meeting provides much-needed clarity on the prospect of a common EU arms export regime, starting with a predictable set of rules. As gaps in capabilities are being identified and new projects drawn up, clear and predictable rules are critical for the sustainability of joint projects. Unpredictability increases risks that could prevent the EU from effectively taking advantage of capable producers and suppliers that enjoy a certain degree of the economies of scale needed to bring down the procurement costs of future systems. Seen in this light, the Franco-German agreement is more than an articulation of a common position; it establishes an enforceable set of rules that could be a starting point for an EU-wide arms export policy. However, before a common EU arms export regime materialises, member states would need to come to agreement on a variety of contentious security issues where national interests and collective goals might not go hand in hand. Some of these endeavours have already begun, starting with the recent amendments to the 2008 Common Position in September. Future measures could entail negotiating more robust end-use control mechanisms and developing a roadmap for more encompassing multilateral arms export agreements that go beyond France and Germany.

5G: Implications on the Battlefield