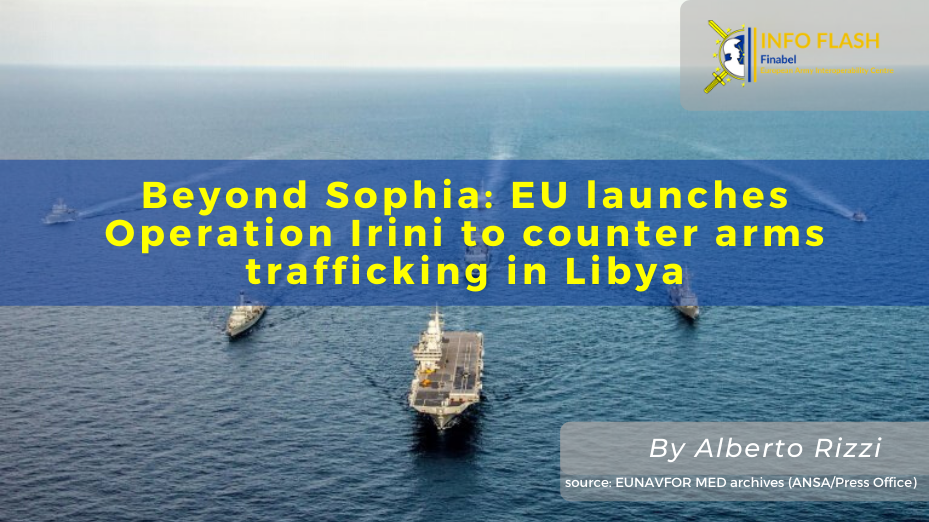 While most of Europe is engaged in a healthcare war against the pandemic threat of Coronavirus, the military conflict in Libya remains an open wound in the Mediterranean scenario and the last week of March has been characterized by renewed offensives[1]. With the mandate of EU Operation SOPHIA expiring on March 31st, the EU has managed to ensure a continued presence in the area, launching a new naval mission, EU NAVFOR MED IRINI. Its establishment represents the practical realization of the truce reached in January at the Berlin Conference, where international backers of Libyan factions agreed to abstain from supplying weapons. This new operation is thus directed at enforcing the arms embargo established by the UN Security Council but never properly implemented. IRINI, officially announced by High Representative Joseph Borrell on 31st March 2020, has been negotiated between representatives of Member States since February and received the green light on March 27th by the Council of the EU.

The main task of Operation IRINI is to enforce the UN arms embargo and patrol the eastern coast of the Mediterranean country. Building on UNSC resolutions (2473, 2420, 2357 and 2292), the mandate of this naval mission is centred on the prevention of arms trafficking within the area, to block the flow of weapons towards the warring sides in Libya. EUNAV FOR IRINI would, therefore, be principally involved in activities of surveillance, gathering of information and control of the waters off the Libyan east coast where the smuggling of arms is likely to happen. To fulfil such a mandate, IRINI would be allowed to carry out inspections of vessels suspected of engaging in arms trafficking or otherwise breaching the international embargo. It will be able to seize their cargo and even to divert those vessels and their crews towards suitable ports to dispose of all items transported illegally. In addition, the EU naval mission would also collect and store evidence of illicit trafficking of arms and personal data of the individuals involved, as well as share that information with the authorities of the Member States. Beyond its main objective, IRINI is supposed to engage also in several secondary tasks, which include the prevention of illegal exports of Libyan petroleum, the training of the Libyan Coast Guard and last the countering of networks dedicated to human smuggling and trafficking. EUNAV FOR MED IRINI inherits SOPHIA’s Operation Commander, Rear Admiral Fabio Agostini, and its headquarters in Rome.

The tasks assigned to Operation IRINI require a significant level of cooperation not only between the Members States involved but also between the different branches of their armed forces that would be deployed in the area. The effective prevention of arms trafficking requires, in fact, high coordination between vessels, patrolling aircraft, satellite monitoring and port infrastructures. At the present state of things, it is supposed that Italy and Spain would provide the bulk of the maritime equipment, at least two frigates plus smaller speedboats to board inspected ships. On the contrary, according to earlier remarks by Defence Minister Kramp-Karrenbauer, Germany would not supply any vessel to the operation, providing a reconnaissance aircraft instead. While Borrell did not disclose any detail about the contribution of each Member State, he suggested during the press conference that enough equipment would be provided to run the operation. Greece’s contribution would mainly consist of its harbour facilities. Interoperability, in this framework of potential diversity of the material provided by each Member State, should be a cornerstone of Operation IRINI. At the strategic level, this would be delivered by the Political and Security Committee and the High Representative, which exercise political control of the mission and would be kept informed by the Operation Commander. Tactically and Operationally, all military resources should be able to coordinate their activities smoothly and resupply independently of the nationality of aircrafts or ships. Poland has announced it would commit a B-28B1R, a sea-patrolling aircraft developed from Soviet licenses, which would require efforts to be fully integrated since no other participating state operates it. Indeed, interoperability within this framework does not imply necessarily the use of the same armaments by the involved armed forces but that these systems would be able to operate jointly[2]. Furthermore, information exchange represents a crucial element in fighting arms trafficking, and data systems should be perfectly able to communicate and share any relevant evidence.

Despite representing the successor of Operation SOPHIA, IRINI is substantially different from it. First, the scope and mandate of IRINI are far narrower than EU NAVFOR MED SOPHIA. While the earlier mission was centred on the contrast to people smuggling in the Southern Central Mediterranean and the rescue of shipwrecked migrants, IRINI’s main objective is to implement the arms embargo on Libya. It would, therefore, concentrate on countering arms trafficking, while the disruption of criminal networks that engage in human trafficking would represent only a secondary objective. The more so, considering the limited geographical coverage of IRINI when compared to the much larger area of Operation SOPHIA: IRINI would operate exclusively in the proximity of the easternmost part of the Libyan coast. The narrow objective and small area of operation suggest that IRINI would also employ a lower number of vessels and aircrafts, requiring slightly fewer resources from participating countries. While SOPHIA had a yearly budget of almost 12 billion euros, IRINI has been allocated 9,8 billion for its first 12 months.

Even before any participating vessel has been put to sea, IRINI already faces several challenges. First, it could not represent the exclusive solution to the arms trafficking towards Libya, as admitted by Borrell who stated the operation could only be “part of a solution”. Arms do not enter the African country only through its sea routes, but also across its extensive land borders, the control of which would require a permanent military presence on the ground, something inconceivable in most EU capitals. Furthermore, IRINI suffers from several limits in terms of the instruments that can be used. According to the Council Decision, no reconnaissance or patrolling activity can be undertaken within Libyan territorial waters or airspace unless by invitation of the Tripoli government, a request unlikely to be submitted often. Moreover, the sea lanes are mainly used by Turkey to supply the internationally recognized government. Thus, the EU risks both a diplomatic crisis with Ankara and to strangle the actor it supports while not affecting Haftar, who receives weapons through land routes and aerial ones. As observed by the German Institute for International and Security Affairs[3], IRINI would at best provide only for a single component of a strategy to implement a full embargo, lacking real effectiveness in itself. Nonetheless, despite its potential shortcomings, it represents an indispensable tool to reduce the level of violence in Libya and potentially bring an end to the civil war between Khalifa Haftar and Fayez al-Sarraj. This conflict has killed 2,000 people already.

[2] According to the Polish National Security Bureau, Polish President Duda has signed the participation of 120 soldiers and a B-28B1R airplane.

[3] Kaim, M., & Schulz, R. (2020). The EU Will Not Be Able to Enforce the UN Arms Embargo in Libya. SWP Comment, SWP – German Institute for International and Security Affairs, Berlin.

Kaim, M., & Schulz, R. (2020). The EU Will Not Be Able to Enforce the UN Arms Embargo in Libya. SWP Comment, SWP – German Institute for International and Security Affairs, Berlin. Retrieved April 1, 2020, from https://www.swp-berlin.org/en/publication/the-eu-will-not-be-able-to-enforce-the-un-arms-embargo-in-libya/