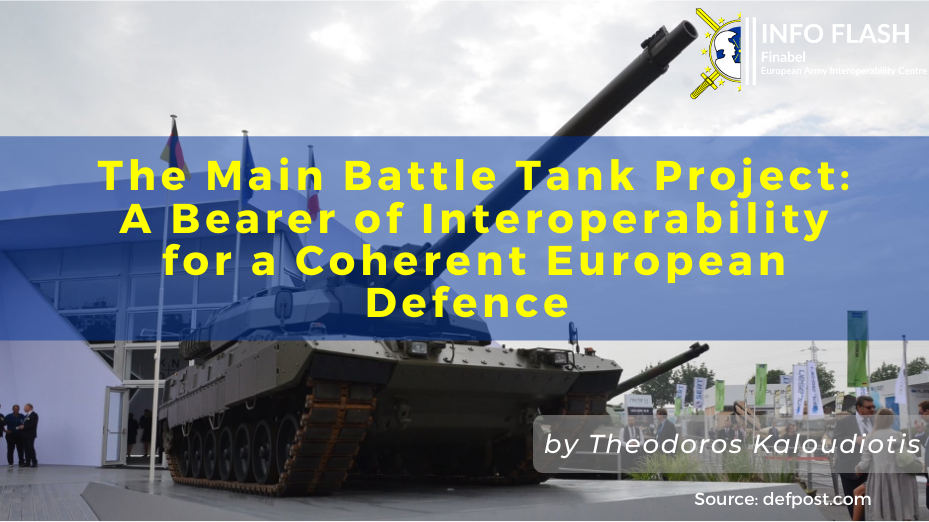 European security and defence discourses have been continuously facing challenges regarding military dependency from NATO and the necessity for further integration. In this dual problematic, the appearance of a new horizon can be the decisive evolving step that will launch a more tangible defense condition within a European integration framework. In 2012, France and Germany announced the decision to establish a mutual attempt to develop a new Main Ground Combat System (MGCS). Manufacturers from both countries have been involved in designing the production of a pan-European tank, the European Main Battle Tank (EMBT), by integrating the chassis of Germany’s Leopard 2A7 tank in a combined shape with the turret of the French Leclerc.

The French-German project is called KNDS (Krauss-Maffei Wegmann +Nexter Defense Systems), including both manufacturer`s names, underlying the joint character of the plan. The core aim of the practical application of the Main Ground Combat System (MGCS) is the replacement of the Leclerc and Leopard-2 tanks by 2035. The contemporary predictions for the EMBT view the attempt as the most powerful tank in the combat tank state of art, having a significant evolving ability since its growth potential is close to 6 tones. The inclusion of the specific tank project in European land forces can be considered as the guiding line of the MGCS as it will be a decisive contribution to the idea of a military team of vehicles that will work together. This team might include manned and unmanned ground and air vehicles and the EMBT can work as the structural spine of land forces in such “team” operations. The logic behind the operational design is linked to the effectiveness of the combined forces whilst targeting further personnel protection.

The bilateral structure in the European defence evolution is the threshold to further interoperability. The next step for a more concrete interoperability structure is the capability of the EU and its Member States to deploy high-intensity military operations. The MGCS project’s efficiency is not only based on the construction of a more efficient tank  but it is also a core operational innovation in a multinational level. Meanwhile, the bilateral character of the agreement comes from “the heart of Europe”, therefore, increasing the normative significance of the project. Moreover, as analysed in the following lines, other European countries have expressed interest in the project, thus, shaping the interoperability horizons with additional European colours.

The project’s significance as a crucial step for the future European defence in a pattern of more independent and sovereign action also includes its potential for the European defence market. The European Main Battle Tank can be a “check-mate” move since European and other tank operators seek ways to modernise their land forces.  Germany’s main battle tank (Leopard 2) is part of the land forces of 16 countries. According to current discussions, by 2030, the aim of the Leopard 3 main battle tank is to replace the existing stocks by the time it becomes available. Poland has already expressed interest in joining the project whilst Italy also seems attracted by the perspective of purchasing the EMBT. Following the insights from the Spanish press, the discourse on the MGCS has also caught the attention of the country’s armed forces in the perspective of reforming the status quo. President Emmanuel Macron and chancellor Angela Merkel discussed the possibility of launching a Franco-German arms export policy at the 45th G-7 summit. Furthermore, the two countries are working on the Common Indirect Fire System, which is a self-propelled artillery object that is about to replace the German PzH2000, a tracked 155-millimeter howitzer, and the French CAESAR, a wheeled 155-millimeter piece. Hence, the MGCS project, as an inner European market construction, can be a way to increase the competitiveness of the European defence market and stabilise the sovereign orientation of the EU in the contemporary pursuit of less dependency from other actors.

The benefits of such a bold project also affects the discourse on the EU’s dependency from NATO. French President, Emmanuel Macron, stated that “what I don’t want to see is European countries increasing the budget in defense in order to buy Americans’ and other arms or materials coming from your industry. I think if we increase our budget, it’s to have to build our autonomy and to become an actual sovereign power.” (Herszenhorn, 2018). Approaching European defence and security in a pattern of sovereignty and autonomy is a unidirectional path to MGCS, whilst MGCS itself is the key to unlock the door to less dependency and more unification. The EBMT appears in the European security and defence discourse in a delicate juncture. European leaders are already concerned by the Russian aggression in Crimea and the American tendency to isolationism. Therefore, the increased necessity for innovative ways to ensure the stability of a solid defense compass cannot be excluded from the project`s significance for the future European defence and interoperability structures.

The barriers and the difficulties that the project might envisage stem from the market disagreements within German industrialists. The program was already blocked by the Bundestag because of the intense disagreement of participants regarding their role in the production. The plan behind the Franco-German agreements was shaped through a division of the ratio of 50% for Nexter, 25% for Krauss-Maffei and 25% for Rheinmetall (Editorial Team, 2019). Yet, the German manufacturers seem willing to play a more decisive role in the project concerning their part in the levels of production, thus, creating an inner dispute.

Skeptical questions have also begun to rise. The strengthening of the European defence in an independent context creates a blurry image regarding the EU and transatlantic bonds. The scenario for less dependency from NATO and stronger European defence has caused contradictory reactions from American officials especially concerning Trump`s representation of such European innovations. Another potential problem is the emerging euroscepticism and how the phenomenon might affect the inner European market.  Due to the fact that defence requirements differ between the European member states and to potential eurosceptic governments that possibly prefer external markets, the production of the EMBT could find barriers in its growth on the European market. In Poland, one of the first European countries that was interested in joining the project, there are already raised voices regarding whether Polish companies can also profit from the EMBT. It remains unclear on how extroverted the project might become concerning the inner European market and its participants.

The post-WWII norms have launched a European image that seems “given”. However, in a macro-historical perspective, the bilateral structure of the Main Battle Tank Project between France and Germany is significantly powerful for the tangible foundations of a United Europe. Collective actions for defence and security can produce norms of common aims and establish shared knowledge of inclusion within Europe. Starting from a joint collaboration with concrete possibilities for expansion, the project serves as a milestone for the practical and normative progress of the European defence future, as well as projecting a more sovereign and autonomous aura in the complicated epoch of multipolarity.

To sum up, this new-born project can launch a more integrational future for the European land forces by providing a route for independence from NATO. This can be done through sharing the loan of the European defence structures, while increasing the integration bonds, and leading to more tangible interoperability. Plus, such innovations have the potential to start as bilateral collaborations but finally lead to further extroverted dynamics that can strengthen the inner European military market and thus the stamina of the European defense systems.

Editorial Team. “France and Germany Are Close to Agreement for the ‘Tank of the Future’ Program”. Bulgarian Military. October 2, 2019. https://bulgarianmilitary.com/2019/10/02/france-and-germany-are-close-to-agreement-for-the-tank-of-the-future-program/ (accessed at: January 8, 2020).

Noack, Rick. McAuley, James. “Why Trump’s explosive claim that Macron wants a European military ‘to protect itself from the U.S.’ is so misleading”. Washington Post. November 13, 2018. https://www.washingtonpost.com/world/2018/11/10/why-trumps-explosive-claim-that-macron-wants-european-military-protect-itself-us-is-so-misleading/ (accessed at: January 8, 2020).

Palowski, Jakub. “MBT for Poland Without Involvement of the Polish Industry?”. Defense24. https://www.defence24.com/mbt-for-poland-without-involvement-of-the-polish-industry (accessed at: January 8, 2020).