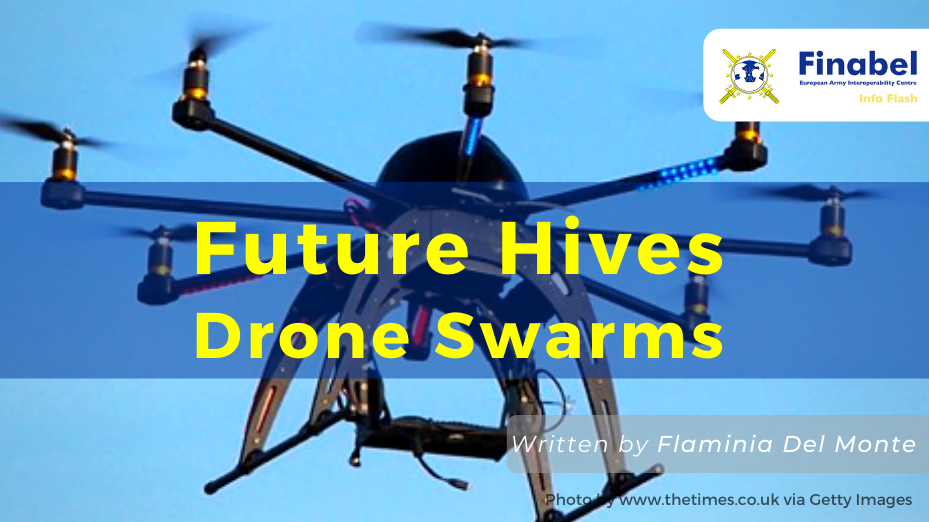 Unmanned Aerial Vehicles (UAVs), or drones, are widely used by armies for missions such as search and rescue, but up to now only, independently operated aircraft have been used. In the last couple of years, several armies have begun to study how different drones can interact with each other, moving as a cohesive body. The main idea behind a drone swarm is that UAVs make their own decisions through the sharing of information: a swarm would be able to perform several tasks thanks to a common network connection. The central concept is that its elements are able to make decisions among themselves and independently, instead of relying on human control, but still keeping a minimum contact.

Such Artificial Intelligence (AI) technology has several applications. For example, drone swarms can identify and attack the enemy defences in an autonomous way; they can search for enemy submarines in the ocean by incorporating infrared sensors; they can assist rescue teams by obtaining a real-time map of the advance of fire.

There are different types of drones and as such different variants of swarms. For the moment, the following have been designed or developed.

The Preparatory Action on Defence Research effort by the European Union proposed the creation of a swarm of drones to confuse, disable and destroy enemy air defences. The Suppression of Enemy Air Defence (SEAD) project is designed to create algorithms that allow a swarm to inspect the opposing defence system, share information within its elements and implement the attack plan, using radar sensors, anti-aircraft fire, explosives of different nature and kamikaze tactics. Currently, there are no tests in place, but the consortium of twelve companies has established that it will first proceed with the creation of guidelines for swarm logistics and appropriate algorithms.

The U.S. is already well underway with the launch of several types of swarms. Among the research conducted so far, the U.S. Defense Advanced Research Projects Agency (DARPA), has been working on a project named ‘Gremlins’. It involves micro-drones the size and shape of missiles, conceived to be dropped from planes and perform reconnaissance over vast areas. Collaborative Operations in Denied Environment (CODE) plans to provide a swarm of the micro-drones with the ability to adapt and respond to unexpected threats, even without human communication. These aircraft are intended to be lowered from the mothership, a sizeable Lockheed C-130 Hercules transport aircraft. Once the mission is complete, the C-130 gathers the Gremlins out of the air using a special capture device and carries them home, with the drones ready for a new mission within 24 hours. The programme provides an affordable solution to conduct air combat operations in the growing Anti-Access/Area-Denial (A2AD) environment. Gremlins are small and affordable and can, therefore, be deployed in higher-risk scenarios that would not be acceptable for manned aircraft.

Furthermore, NASA has already deployed a swarm of over 100 tiny, insect-like drones known as CICADAs, Close-in Covert Autonomous Disposable Aircraft, developed by the U.S. Naval Research Laboratory. Exceptionally small in size, these drones are equipped with tools to measure air pressure, wind speed, and temperature as well as steer themselves as they fall from the sky. The project is intended to be a low-cost, GPS-guided, micro disposable air vehicle that can be deployed in large numbers to ‘seed’ an area with miniature electronic payloads while being interconnected to form an ad-hoc, self-configuring network.

Concerning bigger devices, the XQ-58 Valkyrie drone, which is almost 9 meters long, has been tested. It has been termed as a ‘loyal wingman’ for a human pilot and is capable to carry precision-guided bombs and surveillance equipment. It recently completed its first successful test flight, although the eventual aim is for it to work in a group alongside a manned fighter jet.

Lately, Russia is also gearing up for the construction of drone swarms: Flock-93 is the swarm concept on display at Moscow’s Interpolitex-2019 security exhibition. It will have flying wings and vertical take-off and landing (VTOL) capability, promising both flexibility and a target range of around 95 miles. Many fixed-wing drones have mounted quadcopter-style rotors on top for vertical lift, but Flock-93 has such technology embedded in a flying wing body. Flying wing drones with rotors inside the wing have however already been designed, and vectored thrust gave a flapless flying wedge a lower radar profile than it would have had with flaps.

Furthermore, Russia has also worked on ‘Orion’, a medium altitude long endurance military drone, and the ‘owl-shaped’ spy drone, a UAV weighing 5 kilograms capable of identifying targets 10 meters away, that can endure up to 40 minutes of flying and can cover distances of up to 20 kilometres.

The biggest advantage of a swarm is the ability for the devices to work together in numbers. Swarming utilises a group of low-cost expendable agents that can be used to overwhelm an adversary, reversing the trend of using high-cost aircraft in lower quantities. Also, employing a drone battalion can conserve effort and preserve lives, reducing the risks of suffering human casualties and wasting resources. In fact, governing a swarm of drones is easier than coordinating a team of human beings, since they are programmed precisely for missions that are too massive for soldiers. A drone swarm should reduce the operator burden, who could task it to, for example, find lost units or provide a real-time map of a large advancing fire on several fronts. The swarming technology also provides versatility to a ground force commander who could employ UAV or Unmanned Ground Vehicle (UGV) swarms to accomplish different mission tasks. As already mentioned, drone swarms are low cost, replaceable and reusable in just a few hours, constituting a considerable advantage on the battlefield.

However, applying these ideas to a battlefield presents issues, namely that a combat zone is a lot more chaotic than a construction site or a quiet patch of sky. For a robotic swarm to work effectively, it has to respond not only to missiles hurtling around but to electronic attacks on its communications and GPS. Just as armies are developing innovative technologies based on collective attacks, they will also have to implement a defence system for their swarms and against possible enemy swarms.

In regard to drone swarms and land forces, autonomous swarms are designed to complement, not replace, human capabilities; the robotics will assist soldiers in their complex decision-making process on the battlefield. A potential combination of UAVs and UGVs is ideally suited for difficult-to-manoeuvre environments and missions. The swarms could move quickly and quietly while tracking specific targets in locations where a traditional army formation cannot quickly manoeuvre, all while sending data to units several miles away. A key goal of future projects will be to determine how best to combine a soldier’s cognitive skills with autonomous robotics systems. The U.S. Army has in this regard begun to test the use of drones in collaboration with infantry units. It recently issued FLIR drones – tiny, palm-sized devices – to the 82nd Airborne Division’s 508th Parachute Infantry Regiment, which can be used to fly ahead of soldiers and send back video and other data.

The intercept. “Swarms of Drones, Piloted by Artificial Intelligence, May Soon Patrol Europe’s Borders.” The Intercept, 11 May 2019, theintercept.com/2019/05/11/drones-artificial-intelligence-europe-roborder/.