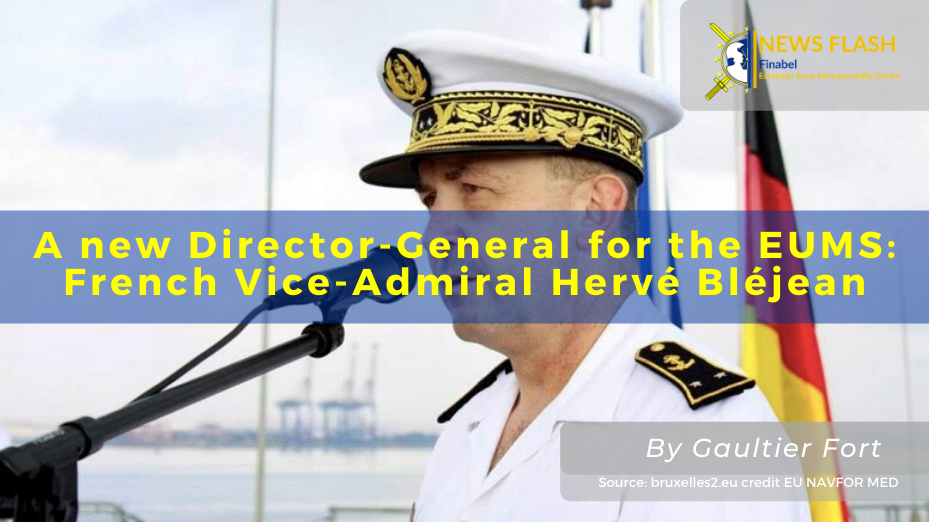 At the end of May, French Vice-Admiral Hervé Bléjean will succeed Finish General Esa Pulkkinen as the head of the European Union Military Staff (EUMS). The post of Director-General of the EUMS has been attributed to the French Vice-Admiral, following his election by the EU Members States’ Chiefs of General Staff of the European Union Military Committee (EUMC) summit in May 2019.

A new director in the service of European defence and interoperability

After four years at the head of the EUMS, General Pulkkinen will be leaving the chair of this strategic European Union defence post. His successor, Vice-Admiral H. Bléjean, in addition to his skills and operational experience, symbolizes a broader shift in strategic thinking for the European Union.

The Vice-Admiral is the first naval officer to take up this high-level position of decision-making and strategic cooperation in the structure of the European Union. This demonstrates the new importance of the maritime component within Common Security and Defence Policy (CSDP) missions and operations (B2 Bruxelles, 2019).

Moreover, the transition will see France return to a leading place in high EU military, since the departure of General de Rousiers in 2015 from the European Union Military Committee (EUMC). This election was welcomed by French Minister of Defence Florence Parly, as a “testimony both to the trust placed in France by our European partners, and to the recognition of French military expertise” (Ministère des Armées, 2019). Thus, the election illustrates France’s active role in strengthening European defence.

In addition, Vice-Admiral Bléjean is a representative of EU-NATO cooperation with significant experience in joint operations. Since 2016 he has worked within NATO command structures, first as Deputy Chief of Staff Operation at the Joint Force Headquarters in Naples, and then as Deputy Commander at the Allied Maritime Command (MARCOM) in Northwood, United Kingdom. (NATO-Biography, Vice-Admiral Bléjean, 2017). Moreover, he maintains a solid knowledge of EU interoperability since his participation as commander of the EU naval force ATALANTA, engaged in the Gulf of Aden off the coast of Somalia to fight maritime piracy. Then, between June 2015 and March 2016, he also served as the First Deputy Commander to EUNAVFOR MED Operation Sophia, which aimed to combat migrant-traffic in the Mediterranean Sea, this operation was later replaced by operation Irini (see our last article on this operation).

The future Director of the European Union Military Staff As a senior officer deeply familiar with the organizational cultures of his national military, the Atlantic Alliance and inter-EU defence structures, Blejean is well-positioned to address the European Union’s future security and defence challenges.

Created in 2001 as a part of one of the bodies of the ESDP (European Security and Defence Policy, since 1992), the EUMS works in close cooperation with the European Union Military Committee. The latter is composed of all the national commanders of the militaries of the EU member states. It is the highest organ of military decision-making in the EU for the development of new cooperative programs and the achievement of ESDP objectives.

After the Treaty of Nice, in 2003, which provides legal foundations for the European defence structure, the Treaty of Lisbon (2007) entered into force in 2009, modifying the existing structure. The Lisbon Treaty integrated the European External Action Service (EEAS), as a genuine single foreign and security affairs body. The EEAS has been effective since 2010 and manages all external cooperation, defence and security actions, including military prerogatives. As the EU’s diplomatic service, it is also responsible for the development and execution of the Common Security and Defence Policy (CSDP). At the head of this service, is the High Representative of the Union for Foreign Affairs and Security Policy. The post has been occupied by former Spanish Foreign Minister, Josep Borrell, since December 2019.

The High Representative (HR), who is also the Vice-President of the European Commission, according to the Treaty, is responsible for the Union’s military policy. Within this structure, the EUMC, like the EUMS, reports directly to the High Representative’s authority. Moreover, they both advise the HR in his functions, in particular on the Common Security and Defence Policy (CSDP, since the Treaty of Lisbon).

Thus, the Director-General of the EU Military Staff follows the HR’s recommendations, as well as the directives from the EUMC (Chairman, Italian General C. Graziano). To carry out its work, the DG EUMS is seconded by a Deputy Director-General and a whole staff of military experts in five key areas; Concepts and Capabilities, Intelligence, Operations, Logistics, then Communications and Information systems (EUMS, 2016). Besides, the EUMS consists of three Liaison officers at SHAPE (Supreme Headquarters Allied Powers Europe, in Mons), at the UN in New York, and NATO in Brussels. To cooperate and involve all EU members, the posts are allocated to military personnel of different nationalities.

Missions and objectives of the EUMS for the next mandate.

Finally, the mission of the EUMS, as described by the current Director-General E. Pulkkinen is “to provide early warning, situation assessment, strategic planning, Communications and Information Systems, concept development, training & education, and support of partnerships” (EEAS, 2016). EU policy needs to be able to contend with crises, both within European borders and abroad, and to provide assistance. The objectives of the EUMS are to strengthen the EU’s diplomatic influence and to ensure that the Union can act militarily.

To conduct an operation, the EUMS can rely on EUFOR, which is a deployment of a contingent of soldiers from EU members, such Eurocorps, the Battlegroups, or National Armies. This European force can be committed by decisions of the EU Council of Foreign Ministers. Today, diverse military operations are part of EUFOR’s peace and security mission, such as EUNAVFOR Irini in the Mediterranean Sea, EU NAVFOR Atalante in Aden Gulf, EUTM Mali, EUTM Central African Republic, EUTM Somalia in Africa, or EUFOR Althea in Europe.

In addition to international operations under the EU flag, one of the main objectives of the future DG EUMS is to pursue and strengthen the work of the five former Directors-General. Today, however, the particular situation in Europe with cyber-threats, the opposition of pro-NATO members to strengthening European defence, or new forms of European military initiatives (such as the “Joint Expeditionary Force” led by the UK and EU members, or the “European Intervention Initiative” launched by France), represent challenges for the new DG. The struggles for cooperation on the one hand, and the risk of multiplication of military structures on the other, will be a significant challenge that Vice-Admiral, the EUMC and the HR will have to manage.

Thus, the DG will have to “facilitate the development of the European Mission Planning and Conduct Cell”, as explained by the French Minister F. Parly (Opex360, May 2019). Furthermore, he will have to consolidate the capability expertise of its staff for the implementation of permanent structured cooperation and the European Defence Fund. Finally, the most important task will be to develop the military culture within the EU. However, the Vice-Admiral can rely on the support of many EU countries to achieve these objectives.

How COVID-19 may impact the European Defence