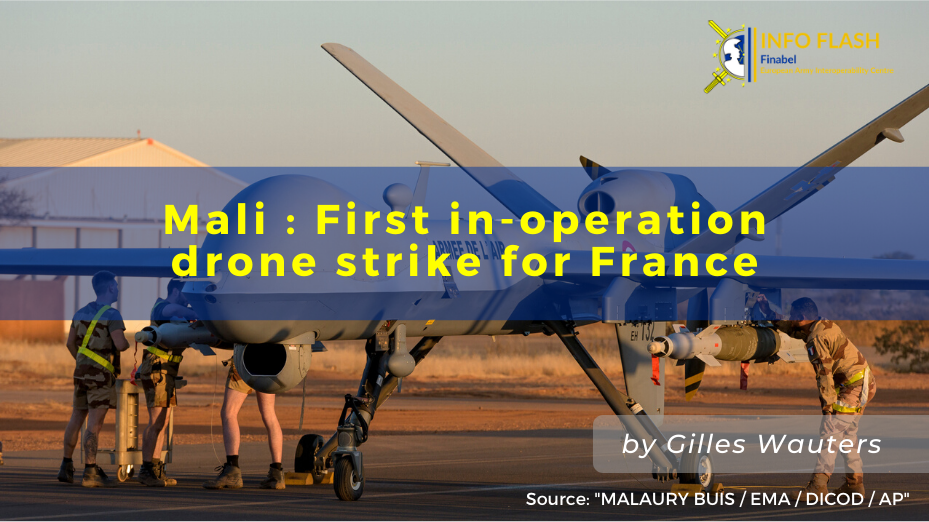 On the 23rd of December, French authorities have reported that they have effectively, and for the first time in their history, executed a drone strike during an operation 150 km northwest of Mopti, in central Mali. This brings France into the circle of nations with drone strike capabilities. Heavily involved in Mali since the 2013 Serval operation, France continued its help to Mali and neighbouring countries with the Barkhane operation which adopted a more regional and inclusive approach to the threat of armed extremists groups in the Sahel region.

History of a Stabilization Effort

The on-site involvement of France – and to a lesser extent the UN and the EU – was triggered by the Malian crisis of 2012, whose roots run deep in Malian history. On March 22nd, 2012, a coup was orchestrated by a part of the military led by Capt. Amadou Sanogo in Bamako. At the same time, the Malian military started asking for help on the north-eastern front since they had trouble fighting the Movement for National Liberation of Azawad (MNLA) and had to retreat towards the southwest. The MNLA ranks were bolstered by the return of Tuareg Malian mercenaries, all of whom were heavily armed, and indirectly helped Sanogo’s putsch by keeping a part of the military busy elsewhere (Salah Helali, 2013).

The Serval operation was a French military intervention, deployed in early January of 2013, as a response to the call of the Malian transition government in order to prevent the taking of Bamako by armed groups and to kickstart the reconquest of the North of Mali. Such a decision was unanimously supported by African States, EU representatives and the UN Security Council. France obtained the signature of a peace treaty between Malian forces and the Tuareg rebel forces on June 18th 2013 and ended its operation on July 13th 2014. Around 5000 soldiers were mobilized and quickly regained control of the country with the exception of the Kidal region. The key to controlling this region lies in an asymmetric warfare where the extremists strategy is based on the presumption that the French army shall eventually leave, as shall the UN’s Mission multidimensionnelle intégrée des Nations unies pour la stabilisation au Mali (MINUSMA), and they simply would have to wait until then (Ben Attar, 2013).

As a response to the insurgents’ strategy, the Barkane operation was thus launched on August 1st 2014 and is still active today. Its main goal is to combat violent extremists groups anchored in the region while collaborating with the MINUSMA, the EUTM and the G5 Sahel Joint Force as well as with Estonia and the U.K. During the month of July 2018, the U.K. sent three CH-47 helicopters and 90 men to Mali, while Estonia sent 50 soldiers to Gao in August 2018. The end goal of the operation is to prevent armed extremists groups from creating safe-havens where they can retreat to, cut off their supply lines, while allowing States in the region to autonomously handle these security threats. The introduction of armed combat drones will certainly help the French objectives as demonstrated on the 21st of December 2019. While French soldiers were searching a combat zone in the forest of Ouagadou in Central Mali, they were ambushed by armed extremists. The strikes, delivered by a Reaper drone and a patrol of Mirage 2000 planes, allowed to neutralize seven of the attackers.

Drones in the French Military Strategy

As the Sahel region covers 3.053 million sq. km, drones represent a critical tool for gathering intelligence, but also act as a crucial force multiplier in areas where forces are spread thin. Cheaper and more cost-effective than most manned aerial vehicles, both in terms of hourly cost and purchase cost, drones possess a similar range to fighter planes. However, whereas fighter planes, cruise missiles and bombers are most efficient when dealing with fixed targets, drones possess an unmatched operational flexibility. Their abilities to stalk and loom over an area for hours to either accumulate precious data or patiently wait for the best opportunity to strike while minimizing collateral damage are a disruptive factor that nations are taking into account regarding the future of warfare and intelligence (Lingel, 2012). However, for all its advantages, drone usage also comes with certain shortcomings. Drones have limited aerial combat abilities. They cannot, by themselves, communicate with civilians for more detailed information, nor can they capture surrendered military personnel, abandoned hardware, or military bases. Drones crash more often due to their limited environment awareness which stems from the fact that the operators’ field of vision is limited to that of the forward mounted camera. A Predator pilot, for instance, has to focus on targets which he intuitively deems more relevant. They can also be shot down, leaving a vacuum which makes the military more vulnerable on the ground. In the worst case, drones can be commandeered by the enemy.

Several French officials had announced the week before the strike that their forces had finished testing their combat drones and were ready and able to perform strikes. The need for these new drones – ordered in 2013 -, arose after the traumatizing Uzbin ambush in Afghanistan where 10 French soldiers had been killed and 21 others wounded. Their combat fleet is currently comprised of five General Atomics MQ-9 Reaper drones, three of which are stationed in Niamey, which can now carry GBU-12 250 kilos laser-guided bombs. Next year, the French army will receive its six additional Reaper drones, all of which can be equipped with either GBU-49 or AGM-114 bombs. By 2030, the fleet will climb up to 24 MQ-9 drones. This implies that the French Reaper fleet will henceforth be solely dependent on the U.S.-based manufacturer General Atomics, a division of General Dynamics, for parts and maintenance. These new capabilities indicate that the French drone fleet just evolved from being strictly surveillance-focused to being able to perform precision strikes on selected targets without the need of another manned aerial vehicle nearby. Such a development opens up new opportunities for neutralising foreign threats, especially in the Sahel region, in cooperation with the regional powers and in accordance with international law. With regards to the Barkhane Strategy, drones will as of now be employed to support the cut-off of supply lines, backing up soldier operations, illuminating certain targets for the Mirage 2000 missiles and perform target strikes on a much more sustained rhythm than what was previously possible.

European Drone Interoperability – The Shadow of the U.S.

President Macron will soon meet with other G5 Sahel Joint Force members to discuss the future of French missions in the region as well as their cooperation with the EU which was enacted in 2017. Through a system of purchase orders, the EU, as the contracting authority, is able to validate each financing request from the G5 Sahel Joint Force and to decide which goods and services will be delivered. The EU also negotiated a grant with the UN in order to help facilitating logistical and operational support from the MINUSMA towards the G5 Sahel Joint Force. France has thus been assuming a leadership role in the region mainly as a security provider. It also acted as an intermediary between the G5 Sahel and the EU logistical and financial support to stabilize the region while a small cooperation between the U.K., France and Estonia has seen the light of day. Recently, it has submitted a proposal to ten Member States, dubbed European Intervention Initiative (E2I), meant to bypass slower EU mechanisms and create a common strategic culture (Bundesministerium der Verteidigung, 2018). Six of these countries already possess MALE drones while two of them possess armed ones. This should pave the way for future cooperation between Member States in the forms of coalition operations. It also underlines that France is affirming its military leadership among the E.U. Member States.

EU Member States have used armed drones several times in the past during coalition operations. While certain European Member States collaborate with the U.S. for its military drone operations, drone usage during Member States coalitions is scarcer. Although the Barkhane and Serval operations were primarily French-led, we highlighted that numerous States lent their help, either logistically or in terms of manpower, though small. NATO’s Unified Protector saw various EU countries cooperate with the U.S. but none launched drone strikes. Italy did send several reconnaissance drones but the U.K. sent none of its drones during the operation. Most of the drone strikes involving the U.K. and other drone-capable European countries took place in Afghanistan, under NATO’s International Security Assistance Force. However, only the U.S. and the Afghan Armed Forces have carried out drone strikes in Afghanistan since 2015 (The Bureau of Investigative Journalism, 2016), and most of them before.

Once again, the various bilateral military cooperation between the U.S. and European countries could open the door to future EU Member States coalitions since many of these countries use the MQ-9 Reaper drone. This means that operational interoperability is possible to a certain extent. Because it also means increased dependency from the U.S., certain countries (such as Italy) have already looked into alternatives. One of those is the possibility of a European-made UAV (Open Society, 2019), an unintended consequence of the overbearing presence of the U.S. in military affairs.

This suggests that EU Member States, with France as their leader, will continue to act as spearheads in terms of foreign stabilization efforts, while the EU and the UN assume their roles of logistical support providers. For now, European interoperability in terms of military drones is being impeded by the lack of common systems, which would allow for “enormous operational advantages, ensuring interoperability, common training, and much more” (Ulrike Esther Franke, 2017).

House of Representatives Committee on Oversight and Government Reform. “Rise of the Drones: Unmanned Systems and the Future of War and the Future”. Subcommittee hearing on national security and foreign affairs. 111th Cong., Second Session. 23 March, 2010. Serial No. 111-118: 1-24.