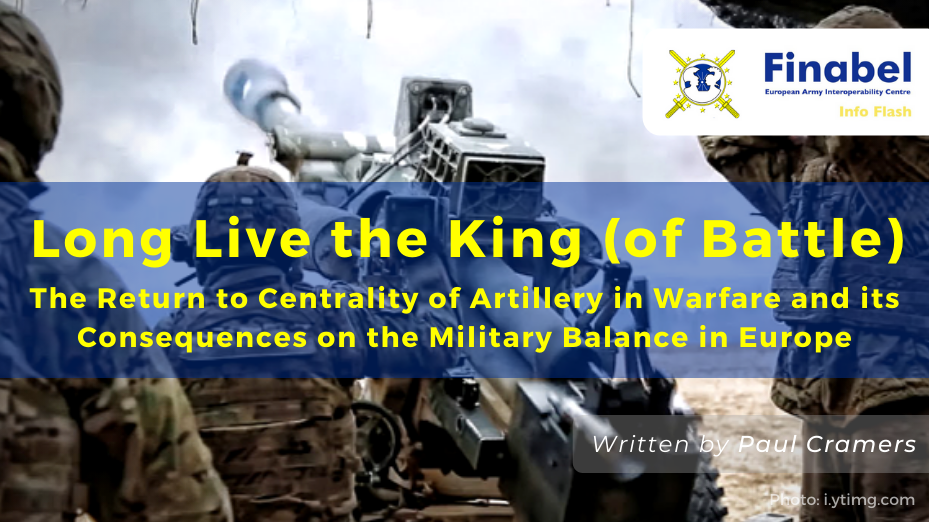 Because of its devastating role against troop formations during the two world wars, artillery gained the title, the “King of battle”. During those conflicts, the majority of casualties were inflicted by shell fire rather than by bullets, bayonets or grenades. Despite this fact, since the end of the Cold War, Western armies have neglected their ground-based indirect fire support capabilities. The main reason for this being that European NATO members and the United States have been preoccupied by counterinsurgency campaigns and peace operations where, in an effort to avoid collateral damage, precision strikes have been preferred to mass of fire. In time, this phenomenon has led Western land forces to rely overwhelmingly on airpower for battlefield support. However, in the event of a future conflict, air support for manoeuvring Western forces cannot be guaranteed because of the progress made in Anti-Access/Area denial (A2AD) systems. This problem is even more acute in the case of a near-peer adversary like Russia.

The prevalence of indirect fire support in Russian dogma

Traditionally, in Russian military doctrine, manoeuvring troops support the artillery rather than the reverse. The preferred role of massed artillery and rockets systems is to destroy enemy formations, whilst manoeuvring infantry and tank formations have the role to fix the enemy. This last point is in stark contrast with Western military thinking, where artillery is used to support manoeuvring troops. For this reason, it is widely recognised that the use of en masse indirect fire support at the tactical level is a signature characteristic of the Russian way of war. This explains why Russian military formations have a quantitatively superior artillery, with a broader variety of munitions available and the ability to strike at longer ranges than similar Western formations.

In view of the importance of indirect fire support in Russian doctrine, it is no surprise that the Missile and Artillery Troops (Raketnyye Voyska i Artilleriya) of the Russian Ground Forces are prime beneficiaries of the country’s overall military modernisation. This modernisation process has been realised through the development and acquisition of new artillery and multiple launch rocket systems (Koalitsiya-SV and Tornado -G/-S), by efforts to modernise existing ones (2S1 Akatsiya and 2S3 Gvozdika) and by returning some Cold War legacy systems (2S7 Pion) to service. The central theme of this modernisation is to integrate all the artillery and missile systems in a unique information space where targeting data gathered by forward spotters, UAVs and electronic intelligence equipment is transmitted in real-time to fire support units so they can execute quick and high precision strikes. So far, the improvements produced by the modernisation of the Russian ground-based artillery and missile systems have been on display in Ukraine and Syria. In both of these theatres, the Russian forces have demonstrated the lethality of their reconnaissance-strike complex, made possible by the effective use of drones and electronic intelligence gathering equipment to direct and adjust artillery strikes missions to devastating effect.

The current imbalance of artillery in Europe

Unlike their Russian counterparts, the European and American militaries have, for the most part, overlooked the modernisation of their ground-based indirect fire support capabilities. This is a result of years of fighting low-intensity conflicts, where artillery has a minor role and most of the fire support to the troops on the ground is delivered by air. This is, in part, thanks to the Western air forces’ ability to establish undisputed air supremacy over the various battlefields and provide around the clock quick-precision-strikes. Consequentially, most Western artillery forces now lag behind their Russia counterparts in terms of quantity and capabilities. As an example, the main self-propelled howitzer in service in the US Army is still the M109A6 “Paladin”, with a firing range of 22 km (unassisted), a firing rate of one round per minute and no ability to conduct multiple-round, simultaneous impact fire missions. In stark comparison, the newest Russian artillery system, the 2S35 Koalitsiya-SV, has a firing range of 40 km (unassisted) and a rate of fire estimated to be between 9 and 16 rounds per minute. Although the inferiority of the American M109A6 in comparison to the latest Russian artillery system should be worrisome, there are a limited number of much more capable artillery systems in service with some European land forces, such as the German PzH2000 and the French CESAR.

The current artillery imbalance between Western and Russian ground forces is aggravated by the fact that most European nations have signed the 2008 Oslo Convention on Cluster Munitions, but Russia hasn’t. Moreover, although the United States is also not a signatory of the Oslo convention, because of political and humanitarian reservations, they implement their own policy that essentially holds them to the terms of the treaty. This results in an additional limiting of the area of effect and effectiveness of Western artillery strikes. To the contrary, Russian artillery and missile units have made frequent use of cluster munitions in combination with thermobaric and conventional HE warheads to great effect against Ukrainian mechanised formations.

In recent years, efforts made by countries like Russia to offset the traditional Western air advantage means that European and American land forces need to rebuild and improve their artillery and rocket forces or risk leaving their ground forces vulnerable to superior enemy firepower. So far, it would appear that Russia’s investments in artillery could give its forces a certain tactical advantage on the battlefield. Nevertheless, Western land forces can still close the gap by once again equipping their ground-based fire support units for high-intensity conflicts and training them to carry out strikes against large formations of mobile armoured vehicles.

Furthermore, the current long-range challenge that Western land forces are facing with an adversary like Russian can be solved with the help of new technical solutions that are currently being studied. One such was recently showcased by Nammo, a Norwegian company, who is developing a 155mm solid-fuel ramjet artillery shell that is advertised to be capable of striking targets at ranges of almost 100 km and would (by far) out-range any Russian artillery system presently in service.

The conflict in Donbas should serve as a reminder to Western militaries that artillery can still reign supreme on the battlefield. So far, it is estimated that about 80-85% of all casualties in that conflict were caused by artillery fire. If Western land forces wish to maintain their edge against a near-peer adversary such as Russia, they need to refocus their efforts on putting more rounds and rockets down-range, in less time, from a greater range.

Michael Jacobson and Robert Scales, “The United States needs to get serious about artillery again”, War on the Rocks (https://warontherocks.com/2016/10/the-united-states-needs-to-get-serious-about-artillery-again/)

Joseph Trevitchick, “Yes, this is ramjet powered artillery shell and it could be a game changer”, The Drive, 2018. ( https://www.thedrive.com/the-war-zone/21531/yes-this-is-a-ramjet-powered-artillery-shell-and-it-could-be-a-game-changer )