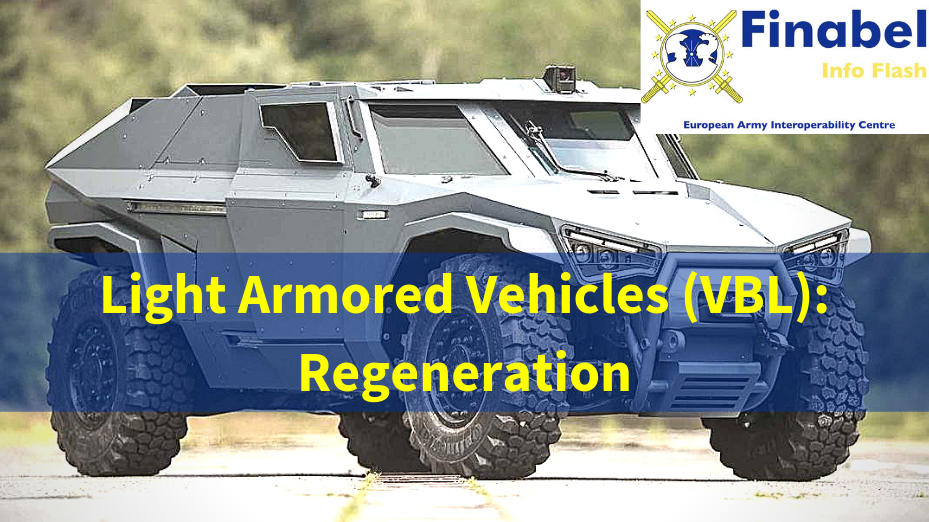 By the end of the next ‘Loi de Programmation Militaire’ (LPM) 2019-25, the French Army plans to have 800 to 2,000 Light Armored Vehicles [VBL] for liaison and reconnaissance missions. This VBL “regeneration” focuses on the engine, the gearbox, the suspension and the braking system.

As part of the second phase of the SCORPION programme (Synergy Enhanced Contact through Versatility and Infovalorization), the VBL should be replaced by the Armoured Engagement Assistance Vehicle [VBAE]. Although this second phase is not expected to take effect before 2025, the Army hopes to begin its VBAE programme, focused on the so-called median segment of the armored vehicles, before this date.

Following the French Army’s plan to start its VBAE before 2025, specialised industrialists have been presenting their vehicles in the hopes of signing a contract, valued at EUR 2 billion, with the Army. So far, the two main candidates in the running are Arquus with the Scarabée vehicle and Thales with their Hawkei vehicle.

The Hawkei Protected Mobility Vehicle (MPV) is a 7 tonnes (10 tonnes with a significant payload) that was originally designed for the Australian Defense Force in order to replace their Land Rover with a light armored vehicle. The vehicle was requested to be more mobile off-road and designed to serve as a versatile platform.

The key points required for this new vehicle were high mobility, including off-roading, an integrated electronic system and a high level of protection against mines and explosive devices (IEDs), as well as some ammunition up to 7.62mm caliber, while being light enough to be air- transportable by helicopter or military aircraft (C-130, C-17, A400M) and certain long-haul civil couriers. All those characteristics can be found on the Hawkei.

Furthermore, the machine is built around a shielded module with a V floor on which are grafted other organic components. It takes around half an hour for two men to install the additional ceramic shielding modules that protect the sidewalls and the roof with a total mass of protection being 850 kg for a level of protection 3. The protection of the six occupants against the effect of mines and IEDs also benefits from suspended seats, thanks to the increased contact with the floor which protects them from the shock wave.

Moreover, the Hawkei can reach 115 km / h on the road with an average consumption of 30 liters / 100 km. It also benefits from the VRE (Vehicle Electronic Architecture), which is wired according to the principle of “plug and play”, which makes it easier to connect the equipment based on the needs of the user.

The Hawkei is configured in 2 versions: 4 doors and 2 doors with a platform. These configurations form the basis of many variants: command, reconnaissance, liaison and utility.

The second contender is the Scarabée.

After announcing it in June 2018, Arquus, formerly known as Renault Trucks Defense, presented its Scarabée light armoured vehicle to the general public for the first time at the Salon du Bourget two weeks ago.

The Scarabée is able to evolve with 2 levels of ground clearance: high, with suspension in the ‘ground position’ and low for standby or airlift.

The most impressive innovation of the Scarabée is that while having all-wheel drive, it can also turn its back wheels independently from its front wheels, allowing it to perform manoeuvres that are still complicated for its competitors. It is equipped with an independent rear-wheel steering and offers extreme mobility in urban areas. Thanks to its mobility, the vehicle can also make tight turns in confined spaces, avoid obstacles in its path without losing its momentum, or remove itself from the enemy fire safely without needing to expose its flanks or rear.

Moreover, if compared to previous models of armored vehicles such as the Humvee, the Scarabée presents a variety of technological improvements. Since the beginning of its design, Scarabée was intended to be a hybrid vehicle. The diesel engine should allow it to travel for around 1000 km and the electric should add an additional range of 15 km.

The 8-tonne vehicle is capable of driving at over 120 Km/h and of quick acceleration with almost 60 hp per ton.

Furthermore, the roof of the vehicle can be fitted with radar units, a gun turret of 12,7 mm, a MMP missile launcher that can reach targets at a medium range and a 30mm cannon (anti-armor shell). The roof itself is interchangeable, and therefore, if needed, can carry other weapons or systems.

Furthermore, thanks to the sliding doors, continuous access to the vehicle is possible even during the air transportation therefore allowing the finalisation of the preparation during the airlift itself.