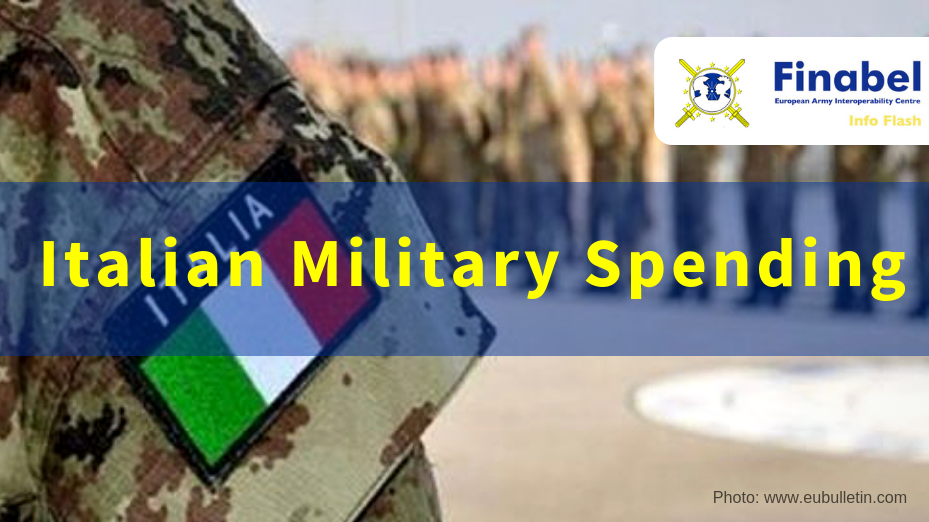 For the year 2018, Italy ranked 11th in the Top 15 countries worldwide with the highest military expenditure, according to SIPRI (Stockholm International Peace Research Institute) analysis. In the European Union, only the UK, Germany and France place higher. A budget increase put Italy up two positions when compared with the previous year. Between 2008 – when Italian spending in defence peaked – and 2015, there was a steady decrease in the budget, before an inversion of the trend in recent years. This fluctuation in the military budget appears to have reached some stability and, as it stood in 2018, constituted 1.5% of the world budget, amounting to approximately €25 billion.

Italy is somewhat notorious for not being inclined to invest highly in defence, which is evident in the consistent cuts over the years. This can be seen by the fact that military expenditure totals just 1.41% of the GDP, putting Italy among the countries that spend the smallest proportions of their GDP on defence. According to the the statistics provided by the Observatory on Italian Military Expenditures (MILEX), the expenditure increase since 2017, translates into a slight increase in terms of percentage of GDP: 1.41% in 2018 against 1.40% in 2017, but should have approached the 1.5% mark as according to the Budget Law, a legislative instrument envisaged by the Italian constitution in which the Government communicates to the Parliament the public expenses and revenues for the following year.

It is necessary to mention that military spending includes not only the budget of the Ministry of Defence but also a series of other significant expenses of other ministries and public bodies. Many budget items are in fact not covered by the Ministry of Defence: The Ministry of Economy and Finance deals with military operations abroad; part of the cost of retired military personnel is handled by the National Social Security Institute (INPS); the Ministry of Economic Development provided funds for the acquisition of new “made in Italy” armaments. Alongside this apportion to the budget it’s necessary to add the €500 million in indirect costs for US bases in Italy.

In real terms, however, the total spending is higher than foreseen by the Budget Law. The real expenditure amounts to €25 billion, exceeding the predicted amount by almost €5 billion. Of this, missions abroad during 2018 totalled approximately €1.28 billion, a slight decrease from the previous year.

It is important to highlight that according MILEX, the Defence Function is divided among different sectors: 74% is directed to personnel, an extra of 4.6% compared to the previous year, is spent on personnel of the Army, Navy and Aeronautics, 9% is used for training and 17% goes towards investments.

As a NATO member, Italy also has to bear the costs of participating in NATO missions, along with the direct pro-quote contribution to the military and civil budget and that for the security investment program. In 2018 Italy contributed €192 million, €125 millions of which to the NATO budget, with the remainder going towards infrastructure investments.

Common Defence also includes indirect costs; for Italy, this entails the overseas stationing of US troops, i.e. the costs incurred by Italy in support of the 59 American bases in the country.

These are expenses related to the construction and maintenance of US military infrastructures, transport and communication networks serving American military personnel, external security of installations, provision of housing, compensation for damage and reimbursement to local communities. The exact amount has not been announced since 2002 despite recent parliamentary questions on the subject.

Also linked to the US presence, Italy must also consider the costs of Nuclear Sharing, including the maintenance of bases dedicated to bombs deployed in its territory: €4.8 million went towards bombs – expenditure included in direct contribution to NATO’s infrastructure investment programs; €88.3 million towards aircraft; and €1 million towards pilots and their training.

There are numerous other elements to consider when analysing Italian spending, such as the Joint Star Fighter Program which involves the purchase of 90 F-35 aircraft. It is possible to look more closely at all the missions sustained during 2018 or how the money is distributed to active and retired military personnel. It could also be interesting to study in detail the discrepancy between the Budget Law and the funds used or investigate the cost of spiritual assistance to the armed forces entrusted to Catholic priests as military chaplains, of which the Italian state takes charge.

It could be even more interesting to closely examine the reasons that led to the distortion of the data that seem to indicate a new increase in military spending, which is only apparent.

This means that there is the perception that the Italian government has greater defence spending than the real one, and that in fact the increase in expenditure is not substantial, but slightly higher than the previous year and considerably lower than the estimates of 2009.

Unfortunately, due to the fragmented origin of the funds and the very long list of elements that make up the actual expenditure for the military and defence, it is very complex to have clear and transparent data. It is hoped that the Ministry of Defence will in future be able to clarify the various budget items and provide a more detailed account of the final cost in each sector, thus making it easier to understand and analyse Italian military expenditure.

As mentioned, it is noted that Italy is slowly increasing its military and defence spending. After a long period of budget cuts and a near-peak decline during the 2010/2015 period, a slow return to more substantial expenditure could be expected. This is good news: a turnaround could be useful for a possible crisis situation, being able to adequately deal with external threats that Europe may face.

Towards a common EU arms export policy: What to make of the recent Franco-German Councils of Ministers meeting