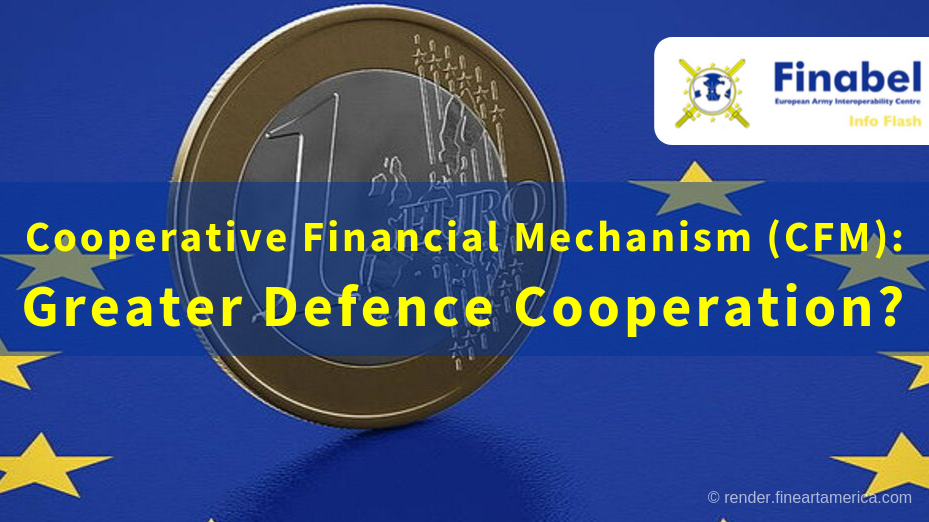 While the realm of security and defence in Europe has been a mainstay of EU policy agenda, Member States felt the need to push further in increasing interoperability and cooperation. As such, the European Investment Bank (EIB) carried out initial examinations for strengthening defence research and its development activities in 2017. The result, announced on 26 September, is the Cooperative Financial Mechanism (CFM), initiated by the European Defence Agency (EDA) in conjunction with the EIB. This endeavour not only involves a strengthening of cooperation between the institutions, but also an opportunity for member states to envisage greater interoperability between their defence programs and military technology.

As an overview, CFM aims to financially support the development of defence projects and military technology. It is a voluntary mechanism and will consist of two pillars. The first is that the EIB will act as the lender to the interested Member State. Support of a project will be guided by the so-called Framework Loan Agreement, where the totality of the financial support, including its interest rate, will be established on a case-by-case basis by the EIB. Secondly, what the agreement establishes is a state-to-state support facility, which will be used to support defence projects in fulfilment of national and European law. The second pillar and all administrative costs will be under the control of the EDA and its existing resources, meaning a strong commitment to further advance EU policy goals. Important to note is the idea of CFM as an initiative entirely up to the Members States discretion. They can decide how much they want to be involved with the project and how much they are willing to contribute. As of today, there are ten Member States that have expressed their interest to sign and join the initiative, with the possibility of six more countries joining in the near future.

Following the European Council suggestion on EIB’s involvement in defence research and development, the EIB Board of Directors authorized the European Security Initiative, aiming to act as a financial plan. With this plan the Bank will support more dual-use technologies as well as ongoing projects in defence and information technology. The initiative was approved in December 2017, with the perspective of spending 6 billion on European Security and defence, based on a three-year timeline, after it commenced.

It should be noted that EIB’s regulations do not allow it to directly invest in strictly military programmes such as equipment, ammunition and weapons. What the Bank is able to do is to support dual use projects for both civilian and military purposes, including technology, airport security, telecommunications and digital communications. The European Security Initiative is very important as it constitutes a very significant effort to strengthen European Security, even with these limitations. This initiative will deal with four sectors: dual use Research and development projects, cyber security, civilian security and dual use investments in EU initiatives. The Cooperative Financial Mechanism; along with the new European Defence Fund, fall under the scope of the fourth sector.

Over the years the European Union has been criticised for the low expenditure and weak military investment of its Member States. However, as the European Commission stated in 2017, Europe has moved more in the preceding two years than in the 60 before that. In fact, the launch of the European Defence Action Plan (EDAP) together with the Annual Review on Defence (CARD) indicated promising advances in the quest of a united defence of Europe. While the CFM – planned to launch in early 2020 – has taken some time to fully develop, it marks a shift in the way the EU, and in particular the EDA, is approaching capacity and research development of defence.

Common defence projects were indeed in place before the introduction of the CFM. These were aimed at stimulating cooperation between Member States, while multilateral efforts were designed to integrate forces and further research efforts. However, these projects were highly dependent on voluntarism between partners. Within this context is where the CFM could be considered a game changer, particularly for cooperation. There are two main reasons for this postulation.

Firstly, and looking from an economic perspective, there is a constant tension between investment security and national fiscal discipline. This means that it is difficult for Member States to justify their defence spending when their responsibilities collide with public debt. With the establishment of the CFM, this problem could be avoided given the fact that projects will be individually funded following a set of criteria set by the EDA. Secondly, supporting projects with the EU budget could encourage more European cooperation. Although there are skeptics of this idea, others strongly believe in the idea of collaboration reducing costs. Once the CFM is fully established, it may be apparent that cooperation has strengthened or not as a result.

Looking towards the future of the CFM, there is a primary concern that involves the support for projects and the ‘capability’ window vis-à-vis EU investments. Due to the fact that the EU budget is funded by all EU members, the question that arises is whether member states will be in compliance with the idea of pooling resources for a handful of projects that might not benefit every state. Nevertheless, the CFM can be considered as a test tool to see how far member states are willing to go and how far their commitment to cooperation and interoperability extends.

The EU is indeed committed to the strengthening of European defence and security. As a response to the need for stronger cooperation within this field, the EDA together with the EIB and the Commission have devised an innovative and promising tool. Using financial support at the EU level, in this case by the introduction of the CFM, is a new tool that, if successful, can reinforce Europe’s defence projects as well as encourage greater cooperation amongst the Member States. The future of European defence may well be dependent on mechanisms such as the CFM. As such, if the Member States positively exploit it, the shift towards a stronger European defence may become a reality.