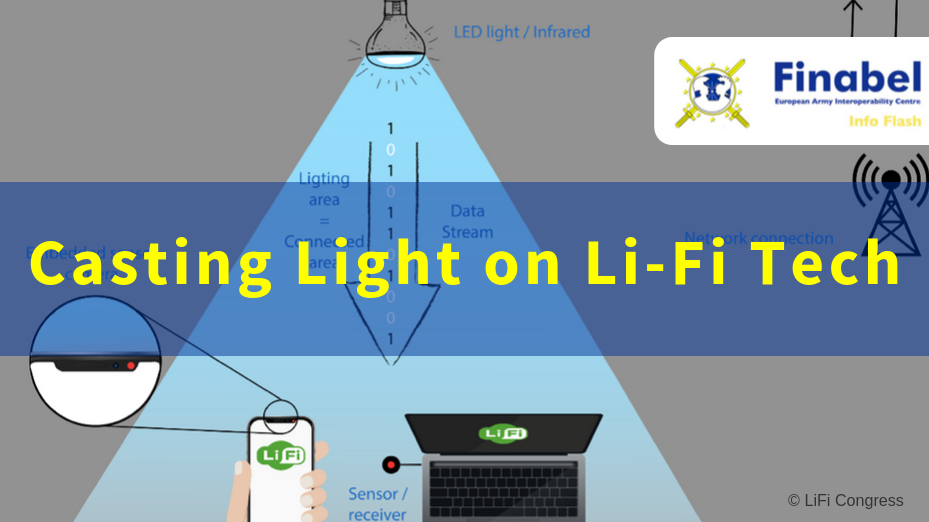 Modern warfare and the modern battlefield now exist with a cyber dimension firmly embedded. In this new age of increasingly complex and varied Anti-Access Area Denial (A2/AD) systems, cyber-attacks and informational warfare, military commanders must employ new technology to counter these threats. One such potential innovation is Li-Fi (Light Fidelity) wireless communication technology. Through simple Light Emitting Diodes (LEDs), Li-Fi provides data transmission that is more efficient, secure and high-speed than Wi-Fi counterparts. By utilising the visual light spectrum rather than traditional radio frequencies, Li-Fi is said to be virtually un-hackable – a potentially invaluable attribute. Whilst this is the main and most obvious attraction for the military, there are a number of other pertinent military applications of Li-Fi technology. This Info Flash will briefly explain Li-Fi, discuss these uses and explore why it is yet to break through.

First introduced by Professor Harald Haas at his TED Global talk in 2011 as something that could change our lives, Li-Fi hasn’t yet flipped the revolutionary switch. But, although it hasn’t met the compound annual growth rate of 82% and $6 billion per year worth as predicted by a 2013 report, Li-Fi technology has slowly progressed with increased investment, industrial testing and pilot schemes.

To transmit data, Li-Fi works by modulating the intensity of the LED bulb (like a radio wave) at a rate of over 1MHz (more than a million cycles per second). The flashing, which is undetectable to the human eye, is received by a photodiode and decoded into a signal, which is then in turn decoded into usable data. By using diode lasers with different light frequencies to mimic different channels, speeds of up to 224Gb/s have been attained in the laboratory, orders of magnitude faster than Wi-Fi. Li-Fi is able to reach such a high transfer rate because the visible light spectrum is 10,000 times larger than the entirety of the radio frequency spectrum. Li-Fi can also provide spectrum relief to Wi-Fi; while the demand for data transmission continues to increase, the US Federal Communications Commission warned against a potential spectrum shortage for radio frequencies, which could mean slower service and increased prices.

The primary benefit of using Li-Fi is its implications to data and operational security. Because light intrinsically cannot pass through walls and other opaque surfaces, secure communications can be established. Further, in July 2018, British Telecommunications (BT) Defence worked with PureLiFi in testing and found they could “apply different security levels to individual lights or a group of lights allowing for very sophisticated geofencing.” To demonstrate the potential of this, one might consider a mission command post. In November 2018, the U.S. Army Research, Development and Engineering Command reported that it was investigating just that. Frank Murphy, of the U.S Army’s Expeditionary Maneuver Support Directorate, said that “a command post of any size is an information processing centre.” He went on to discuss how Li-Fi can improve the operational effectiveness of the post. By using Li-Fi within the enclosed command post, the data is secure as it cannot leak out and the electronic exposure of the post is limited. This is because adversaries cannot passively listen to Li-Fi as is possible with radio frequencies. The post is also protected from communication jamming and radar spoofing – a deception technique to display inaccurate information. Longer range capability is also being researched and could enable secure post-to-post, ship-to-ship and ship-to-post communication in addition to secure internal communication. This secure network concept can also be utilised for confidential meetings and conferences.

An additional advantage of Li-Fi in the command post scenario is that it removes the time-consuming task of running data lines in operational centres and command posts. By simply plugging a transceiver into a USB port, a device can be hooked up to the network of the command post. Murphy emphasised that “tactical speed is absolutely essential for command post setup” and added that they hoped to integrate Li-Fi into the wiring harness to further increase the speed of setting up and taking down the post.

The continuing advancement in drone technology provides land force commanders with an ever-increasing arsenal of capabilities. But it also poses a succession of threats to be guarded against that are more complex than ever before.

The French Army has also been exploring Li-Fi options. In June 2018 they issued a contest to develop Li-Fi equipment for the Technical Section of the Army. Lucibel, a French lighting and LED innovation company, won the contest and was invited to collaborate for testing and also to participate in the Innovation Defence Forum in November. They are expected to showcase their “Lucibel Li-Fi Solution” and demonstrate the technology.

Another benefit of using Li-Fi is its immunity to electromagnetic interference (EMI). Enemies may employ EMI attacks aimed at disrupting military equipment. By using Li-Fi, these attacks would be rendered ineffectual and the equipment and operational success will be shielded. Similarly, electromagnetic incompatibility issues can arise when emissions of one device causes disruption to another device. Again, this will be avoided. Some sophisticated medical equipment can suffer from EMI from radio wave emitting devices, so using Li-Fi can circumvent this and enable better patient monitoring and facilitate emergency communication. Li-Fi can be used to communicate in other sensitive environments, such as those around explosives where radio frequencies are prohibited. Because Li-Fi emits less heat, it can also be used in heat-sensitive environments.

Further applications for Li-Fi technology includes working in conjunction with next-generation augmented reality equipment. Underwater vehicles and divers can also use Li-Fi to communicate because light waves can penetrate deep water. Ships can also use Li-Fi as a solution to Wi-Fi not being able to penetrate their steel structures.

So where is Li-Fi now?

Li-Fi was introduced as a game changer, but 8 years on it has struggled to meet the high expectations and excitement that surrounded it. There are currently only a few products in the market (e.g. OledComm’s “MyLiFi” lamp, introduced in January 2018) and these don’t provide the transformant experience that people had hoped for. Whilst the data transmission speeds in the laboratory are high, providers have had difficulty getting serviceable products to operate at the same speed as standard Wi-Fi networks. In fact, there is still several shortcomings of Li-Fi. Its reliance on a stable line of sight and short range limits its effectiveness and the situations within which it can be used, whilst its susceptibility to interference from other harsh light sources adds to the reliability issues and can often leave a user with an interrupted connection. There is also questions about the upload capability of Li-Fi, further adding to the complexity of the technology.

There are also major market inhibitors to the success of Li-Fi. A sizeable obstruction is that integration of Li-Fi technology would require a major overhaul and investment into lighting and infrastructure, something that actors are often unwilling to do for a still-emerging technology. Similarly, there are very few existing devices that are compatible with Li-Fi, decreasing the incentive for its development. Li-Fi’s image is also an issue on two accounts. Firstly, it still has a relatively low profile, hurting investment, and secondly, misconceptions are common. Many people believe Li-Fi is intended to replace Wi-Fi and fix slow internet speeds. In actuality, researchers say Li-Fi is more suitable as a supplement to Wi-Fi and that it cannot overcome the limiting factor of internet providers delivering slow speeds.

As the demand for secure and fast data transmission continues to increase, the necessity for Li-Fi may become clearer. Evidently, there is a multitude of possibilities that Li-Fi technology can offer; through collaboration with this new domain, the military may be able to harness its power and shape it to its advantage. However, Li-Fi is still a very new technology and has numerous issues to overcome before it can gain traction and the interest of large investors. In a world where innovation and new products are developed at astonishing rates, Li-Fi has somewhat stalled. Recent demonstrations by Astronics Company in October 2018 and an exhibition by Air France in June 2019 show some promising progress and investment, but it is unlikely that this technology will break through in the immediate future. But, by monitoring the situation and shrewdly directing investment, the military can be at the forefront of new developments in Li-Fi and perhaps gain a vital edge on the battlefield in ten, fifteen years’ time.

John C (2018), What is Li-Fi? What are its Pros, Cons & applications? Available at http://www.circuitstoday.com/li-fi

Livinus C (2018), Lucibel is invited by the French Army to participate at the Defense Innovation Agency, Li Fi Tech News, Available at https://www.lifitn.com/blog/2018/11/24/lucibel-is-invited-by-the-french-army-to-participate-at-the-defense-innovation-agency